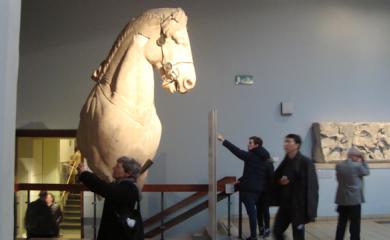 The Mausoleum at Halicarnassus (now Bodrum, on the south-west coast of Turkey) was one of the Seven Wonders of the Ancient World. It was built in the 4th century BC to house the remains of the powerful Persian governor Mausolus and Artemisia, his sister and wife. The site of the mausoleum was excavated in the mid-1850s by British archaeologist Charles Thomas Newton.

Among Newton’s discoveries were remnants of gigantic stone horses that sat atop the mausoleum roof. These horses were originally more than five metres tall and exquisitely carved from local marble. According to Newton, they were also well endowed. Writing several years later, he recalled having to tow the back half of a Halicarnassus horse through local streets – causing women to swoon at the sight of its enormous genitals:

“After being duly hauled out, he was placed on a sledge and dragged to the shore by 80 Turkish workmen. On the walls and house-tops as we went along sat the veiled ladies of Bodrum. They had never seen anything so big before, and the sight overcame the reserve imposed upon them by Turkish etiquette. The ladies of Troy gazing at the wooden horse as he entered the breach, could not have been more astonished.”

Fragments of the horses are held by the British Museum – though as with other foreign artefacts, there is pressure to return them to their place of origin.

Source: Charles Thomas Newton, History of Discoveries at Halicarnassus, 1863. Content on this page is © Alpha History 2016. Content may not be republished without our express permission. For more information please refer to our Terms of Use or contact Alpha History.

Ancient writers like Pliny the Elder often waxed lyrical about the statue of Aphrodite on the island of Knidos (now located in south-east Turkey). Crafted in the 4th century BC by the Athenian sculptor Praxiteles, the Aphrodite of Knidos depicted the goddess of love fully naked and preparing to bathe – but demurely covering her genitals with one hand. Historians believe that Praxiteles’ Aphrodite to be one of the most influential sculptures of ancient times, shaping later and more famous works like the Venus de Milo. But in its own time, the perfect form and erotic beauty of the Knidos Aphrodite was legendary, drawing crowds of people each day.

According to Pliny, one man was so besotted by the Aphrodite that he purposefully remained with the statute overnight, using it for his own pleasure – and leaving his mark:

“There is a story that a man once fell in love with [the Aphrodite] and, hiding by night, embraced it, and that a stain betrays this lustful act.”

Source: Pliny, Natural History XXXVI.iv.21, c.79AD. Content on this page is © Alpha History 2016. Content may not be republished without our express permission. For more information please refer to our Terms of Use or contact Alpha History.