In 1800, a Mrs Polly Lutgert of New York wrote to several newspapers on the eastern seaboard, informing them that her husband John had left her “about the first of June”. According to Mrs Lutgert’s letter, her husband was:

“…a dirty Dutchman, between five and six feet high, has a round face, snub nose, large mouth and teeth, squint-eyed and marked with the smallpox. In addition to this he has long small legs, knock knees, [a] humped back, cat hammed and [is] a fool.”

And that she grants her estranged husband:

“…free and interrupted ingress and regress into any part of the world, my bed only excepted.”

Source: Virginia Argus, October 31st 1800. Content on this page is © Alpha History 2016. Content may not be republished without our express permission. For more information please refer to our Terms of Use or contact Alpha History.

In late 1894, a Michigan newspaper reported that a Massachusetts woman had ended her 43-year engagement – after discovering her fiance had been secretly drinking. According to the report, she had nurtured these suspicions for much of their betrothal: 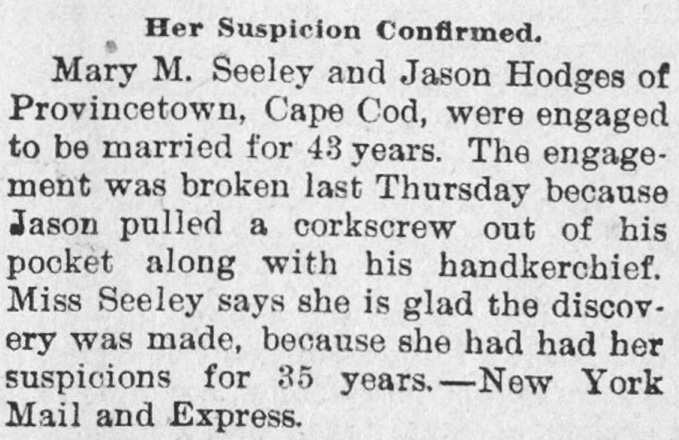 Source: The Ann Arbour Argus, December 28th 1894. Content on this page is © Alpha History 2016. Content may not be republished without our express permission. For more information please refer to our Terms of Use or contact Alpha History.

In May 1831, a New York newspaper reported the marriage of Mrs Frances Tompkins, aged 105, and Mr Moses Alexander, aged 98. According to the report, they were married in Bath, Steuben County, New York state, on April 11th. The wedding was conducted by the Reverend Doctor Smith. And afterwards?

“They were taken out of bed dead the following morning.”

Source: The Brockport Free Press, New York, May 18th 1831. Content on this page is © Alpha History 2016. Content may not be republished without our express permission. For more information please refer to our Terms of Use or contact Alpha History.

In 1505, 46-year-old Henry VII, then two years a widower, began to think about remarriage. One potential wife suggested by Henry’s courtiers was 26-year-old Joanna of Naples. At age 17, Joanna had married her own nephew Frederick, the future king of Naples, but he died a few weeks after their marriage. After this, Joanna became a popular target on the medieval monarchical marriage market.

Curious about the young Italian, Henry sent two envoys to Naples with orders to procure “a portrait of the young queen”. They were also issued with a 24-point list of “instructions for taking a survey of her person”, which required information about Joanna’s face, figure, complexion, personality, eating habits and financial position. Some of Henry’s specifics are quoted below, along with the written comments of his envoys:

[Envoys] “As far as we can perceive or know she is not painted, and the favour of her visage is after her stature – of very good compass and amiable, and somewhat round and fat…”

[Henry] “Mark whether her neck be long or short.”

[Envoys] Her neck is comely, not misshapen, nor very short nor very long, but her neck seemeth to be shorter because her breasts be full and somewhat big…”

[Henry] “Mark her breasts, whether they be big or small.”

[Envoys] “They be somewhat great and full… they were trussed somewhat high, after the manner of the country, it caused them to seem much fuller…”

[Henry] “Mark whether any hair appear upon her lip.”

Henry was impressed enough with the report but the union did not proceed, most likely due to political considerations. Henry VII died in 1509 without remarrying.

Source: Document cited in Henry Bacon, The Historie of the Raigne of King Henry The Seventh, 1622. Content on this page is © Alpha History 2016. Content may not be republished without our express permission. For more information please refer to our Terms of Use or contact Alpha History.

In 1785 the London press became fascinated by the antics of Harriet Errington, uncovered at divorce proceedings instigated by her wealthy businessman husband. Mrs Errington was accused of numerous counts of adultery. Among those listed as her lovers were “Augustus Murray Smith, Captain Buckley, Captain Southby, Thomas Walker, and many others”. In one whimsical account of the testimony, Mrs Errington was visited for dinner by Captain Southby – but according to maidservant Molly Mitchell, the Captain and Mrs Errington abandoned their food and went upstairs:

“We cannot absolutely say how she was engaged while the repast was cooling… The Captain and she, it is supposed, were taking a wet and relish together; or he might probably be instructing her in… the modern methods of attack and defence. She is a woman who thirsted after knowledge and if the Captain had anything new to communicate, she was sure to pump it out of him… Molly Mitchell supposes the Captain discharged his musket, for though she did not hear the report, she smelt the powder…”

Even more shocking to London society was Mrs Errington’s lewd dealings with working class men and servants. Simon Orchard, a teenage footman, testified that while asleep in his bed:

“…he was waked by the bedclothes being stripped off him, and upon looking he observed the said Harriet Errington, in her shift only… and Phebe Lush, a fellow servant, by his bedside. And the said Harriet Errington pulled up his shirt and caught hold of his private parts, and pulled him out of bed by the same, and said she would pull him down the stairs… This deponent struggled a good deal with her to get away.”

Mrs Errington’s approaches continued the following night, when she ordered Simon to hide under the bed of a female servant, in order to spy her undressing. On the third day, Orchard walked in on Mrs Errington trimming her pubic hair, before a small crowd of onlookers:

“As this deponent was going into the kitchen, this deponent saw the said Harriet Errington standing before the fire, with her petticoats as high as her knees… Phebe Lush and Mary Mitchell and her master’s son, a boy about five years old, were with her… Seeing some small pieces of hair laying upon paper, [Orchard] asked what it was, and the little boy told him, that Mrs Errington had been cutting it off under her petticoats…”

The London court granted George Errington a divorce without hesitation. In 1795 George was murdered by one of his own spurned lovers, Miss Ann Broderick, who shot him through the heart. The fate of the former Mrs Errington is unknown.

Source: Various, inc. Randall, The Trial of Mrs Harriet Errington, London, 1785. Content on this page is © Alpha History 2016. Content may not be republished without our express permission. For more information please refer to our Terms of Use or contact Alpha History.