During the Tudor period, the back-ends of carts often doubled as places of punishment for minor criminals and delinquents. Though the exact origins are unclear, to be dealt with at the rear of a cart marked one’s fall from civilised society. Scores of prostitutes and adulterers were ordered to be “tied to a cart’s arse” and either whipped there or paraded around town for public humiliation. In 1555 a London man named Manwarynge was “carted to Aldgate with two whores from The Harry, for bawdry and whoredom”. In 1560 “the woman who kept the Bell in Gracechurch” was carted for pimping. Sir Thomas Sothwood, an Anglican priest, was carted for “selling his wife”. In North Carolina Mary Sylvia was found guilty of blasphemy and “carted about town with labels on her back and breast, expressing her crime”. Some were also punished for slanders involving carts; Sir Thomas Wyatt was thrown into prison in 1541 for telling others that Henry VIII should be “thrown out of a cart’s arse”.

Another brief but interesting mention of ‘carting’ comes from King’s Lynn, Norfolk, where in 1587:

Source: Benjamin Mackerell, The History and Antiquities of the Flourishing Corporation of King’s Lynn &c., London, 1738. Content on this page is © Alpha History 2016. Content may not be republished without our express permission. For more information please refer to our Terms of Use or contact Alpha History. 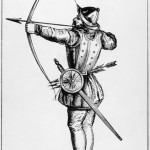 Coronial records from the 16th century describe the death of Henry Pert, a gentleman from Welbeck, near Worksop, Nottinghamshire. Pert died a day after receiving an arrow to the head – from his own weapon. According to the coroner’s finding, Pert was stood over his loaded longbow while attempting to release a jammed arrow:

Lord Edmund Howard was a British nobleman and a courtier to Henry VIII. He was also related to Henry’s three ill-fated wives (Anne Boleyn was his niece, Jane Seymour a cousin’s daughter and Catherine Howard his own daughter). An inveterate gambler, Howard squandered a fortune acquired from his first wife and had to palm off his children on relatives. He was also plagued by ill health. While stationed in Calais in the mid-1530s Howard suffered from painful kidney stones. For advice, he turned to Viscountess Lisle, an influential member of the court with a reputation for dispensing good medical advice. Lady Lisle provided Howard with a diuretic “powder for stones”, probably dandelion-based. In a letter believed to have been written in 1536, Howard wrote to Lady Lisle to advise that her powder had resolved his kidney stones – but had left him with another embarrassing problem:

“I have taken your medicine, which has done me much good. It has caused the stone to break and now I void much gravel. But for all that, your said medicine hath done me little honesty, for it made me piss my bed this night, for which my wife has sore beaten me, saying ‘it is children’s parts to bepiss their bed’. You have made me such a pisser that I dare not this day go abroad.”

Howard asked Lady Lisle to provide him with “a wing or a leg of a stork”, as he had heard that eating one of these would put an end to his bed-wetting. It is not known whether he resolved his particular problem, however, his health continued to deteriorate and he died in 1539.

Source: Letter from Lord Edmund Howard to Viscountess Lisle, undated, c.1536. Content on this page is © Alpha History 2016. Content may not be republished without our express permission. For more information please refer to our Terms of Use or contact Alpha History. 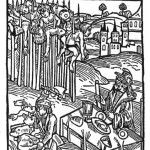 In 1582, residents in a village in Silesia complained of visitations from a bad-breathed vampire named Cuntius. Before joining the ranks of the undead, Johannes Cuntius had been a respected citizen and aldermen in Pentsch. In February 1582, Cuntius was fatally injured after being kicked by one of his “lusty geldings”. Before expiring, Cuntius lingered for several days, complaining of ghostly visions and feeling like he was on fire. According to one witness, at the moment of his death, a black cat entered the room and jumped onto his bed. As befitted his civic status, Cuntius was entombed near the altar of his local church. But within a few days, several townspeople reported receiving visits from the dead man. All described a “most grievous stink” and “an exceedingly cold breath of so intolerable stinking and malignant a scent as is beyond all imagination and expression”. A whole litany of annoyances and harassments was attributed to the vampire, including accusations of:

After a brief judicial hearing, Cuntius’ body was thrown onto a bonfire and burned, then hacked to pieces and crushed to ashes. As might be expected, the spirit of Cuntius ceased its nocturnal visits. By coincidence, the village of Pentsch became the town of Horni Benesov – the ancestral home of United States presidential candidate and Secretary of State John Kerry.

Source: Various inc. Henry More, An Antidote against Atheism (Book III), 1655. Content on this page is © Alpha History 2016. Content may not be republished without our express permission. For more information please refer to our Terms of Use or contact Alpha History.

Antonius de Arena was born into a well-off family near Toulouse, France, sometime around 1500. He studied law at Avignon and later joined the French army, participating in the Italian War of 1521-26. Arena, who was a romantic and something of a ladies’ man, did not enjoy military life; he much preferred writing and teaching. Arena wrote several texts on matters of law, as well as manuals on conduct and etiquette. In 1529 he penned The Rules of Dancing, a quite thorough account of several examples of basse danse, the slow-moving court dances popular with the French nobility. Arena urged his readers, particularly young men, to take their dancing seriously, for “to dance badly is a great disgrace”. The young person who cannot dance well, he writes, is likely to fall victim to “proud ladies and damsels who gossip away like magpies”. In contrast, the man who can dance well will “kiss many charming ladies and a thousand girls”.

He goes on to offer advice on music, movement and choreography – as well as proper deportment while dancing:

“Do not have a dripping nose and do not dribble at the mouth. No woman desires a man with rabies…”

“Do not scratch your head in search of lice…”

“When you are dancing do not keep your mouth open, since the flies… could easily fly into your gaping mouth and choke you…”

“Always maintain a smiling aspect when dancing and, I pray you, a pleasant friendly expression. Some people look as if they are weeping and as if they want to shit hard turds…”

Source: Antonius de Arena, The Rules of Dancing, 1529. Content on this page is © Alpha History 2016. Content may not be republished without our express permission. For more information please refer to our Terms of Use or contact Alpha History.