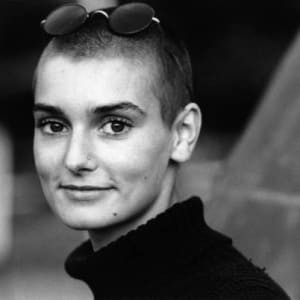 Sinéad O’Connor (1966- ) is an Irish singer-songwriter known for her considerable talent, her outspoken nature and sometimes controversial political views.

O’Connor was born in Glenageary, County Dublin, and named after Sinéad de Valera, wife of the first Irish president Eamon. Her parents separated when O’Connor was young and she endured a turbulent childhood, during which she was institutionalised for a time.

O’Connor’s powerful singing voice drew attention in her teenage years, leading to several engagements and music deals. Her first album, The Lion and the Cobra, reached number three in Ireland and the Top 40 in the United States, Britain, Australia and elsewhere.

Her second album, I Do Not Want What I Haven’t Got, was the most successful of O’Connor’s career, selling more than seven million copies worldwide. The song “Nothing Compares 2 U”, written for O’Connor by Prince, spent several weeks at number one in numerous countries.

O’Connor is known for her outspoken opinions on a number of issues, particularly the behaviour of the Catholic church and the mistreatment of women and children. She has also spoken in support of Sinn Fein and a united Ireland.

Released on her 1997 album The Lion and the Cobra, O’Connor’s single “This is a Rebel Song” is a ballad with distinct political overtones. It can be interpreted as a pained love song from an Irish woman to her English lover – or as plaintive cry by Ireland, pleading for recognition and appreciation by England.

The title of “This is a Rebel Song” is said to be a backhanded reference to Irish rock group U2, who O’Connor has frequently criticised, and their song “Sunday Bloody Sunday”.

I love you my hard Englishman
Your rage is like a fist in my womb
Can’t you forgive what you think I’ve done
And love me, I’m your woman

And I desire you my hard Englishman
And there is no more natural thing
So why should I not get loving
Don’t be cold, Englishman…

Oh, please talk to me, Englishman
What good will shutting me out get done
Meanwhile, crazies are killing our sons
Oh listen, Englishman

I’ve honoured you, hard Englishman
Now I am calling your heart to my own
Oh let glorious love be done
Be truthful Englishman

Citation information
Title: “Sinead O’Connor, This is a Rebel Song (1997)”
Authors: Jennifer Llewellyn, Steve Thompson
Publisher: Alpha History
URL: https://alphahistory.com/northernireland/sinead-oconnor-this-is-a-rebel-song-1997/
Date published: August 14, 2019
Date accessed: June 23, 2020
Copyright: The content on this page may not be republished without our express permission. For more information on usage, please refer to our Terms of Use.

This website on Northern Ireland and the Troubles is created and maintained by Alpha History. It contains 192,305 words in 276 pages and was updated last on June 11th 2020. For more information, visit Alpha History or our Terms of Use.