Peter Mandelson (1953- ) is a British Member of Parliament, a former advisor to Tony Blair and the Secretary of State for Northern Ireland between 1999 and 2001. 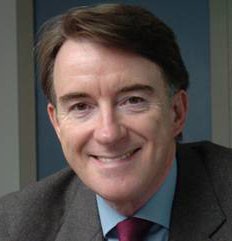 Mandelson was born in north-west London, the son of a Jewish newspaper publisher and the grandson of a former Labour MP. Mandelson was educated at Hendon Senior High School before completing a degree in politics, philosophy and economics at Oxford. While at university he became involved in left-wing political groups.

After graduation, Mandelson worked for a time in local government and as a television producer, before rejoining the Labour Party in 1985. Seven years later, Mandelson was elected to the House of Commons, representing Hartlepool. He became Labour’s communications director (or ‘spin doctor’), managing the party’s communications, branding and election campaigns.

In October 1999, Tony Blair named Mandelson as Secretary of State for Northern Ireland, replacing the effective but sometimes divisive Mo Mowlam. He would serve in this capacity for two years. Mandelson oversaw the formation of a power-sharing government in Belfast and implemented the recommendations of the Patten Report on Northern Ireland policing. While Blair and Mowlam were seen as more sympathetic to Nationalists, Mandelson leaned more towards Unionist interests.

In February 2000 Mandelson, who had become frustrated with the IRA’s lack of progress and clarity on arms decommissioning, suspended the Northern Ireland Assembly and reintroduced Direct Rule. This outraged Sinn Fein – but with power-sharing at risk of collapse, it was probably the best course of action. Mandelson restored devolution on May 30th, three weeks after the Provisional IRA began decommissioning its weapons.

In December 2000, Mandelson welcomed US president Bill Clinton, who was making his third and final visit to Northern Ireland. Weeks later, Mandelson was removed as Secretary of State due to a domestic scandal over passport applications. He resigned from the House of Commons in 2004 and despite his chequered history was appointed European trade commissioner. He was given a life peerage in 2008 and entered the House of Lords as Baron Mandelson. He returned to the cabinet between 2008 and 2010, holding several portfolios under Gordon Brown.