Mo Mowlam (1949-2005) was a British Labour politician and Secretary of State for Northern Ireland during the Good Friday peace negotiations. 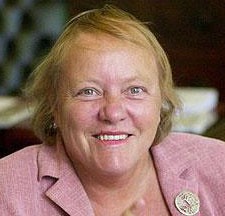 Born Marjorie Mowlam in Watford, she endured a difficult childhood, in part due to an alcoholic father. Mowlam was educated in Coventry before completing a degree in sociology at Durham University. She studied and lectured in the United States, completing her doctorate at the University of Iowa.

Politically active during her student years, Mowlam joined the Labour Party in 1969. During the 1970s she worked as a researcher for Labour parliamentarian Tony Benn. Mowlam ran for parliament in 1983 but was not elected. Four years later she won a seat in the House of Commons, representing Redcar. Despite her inexperience, Mowlam was named the Labour Party’s spokesperson on Northern Ireland just ten months later.

Mowlam was a key backer of Tony Blair during his rise in the mid 1990s. When Blair became prime minister in May 1997, he named Mowlam as his Secretary of State for Northern Ireland (it is claimed that she refused the role three times before accepting).

Arriving in Ulster, Mowlam worked to bring Sinn Fein and radical Loyalists to the peace table. Unlike previous British politicians, who tended to negotiate formally and priggishly, Mowlam was a charismatic and disarming figure capable of humour, warmth and empathy. She was also given to plain speaking that verged on rudeness (she once told Protestant firebrand Ian Paisley to “fuck off”). These attributes helped break down political and sectarian barriers in Northern Ireland.

Mowlam was also capable of great courage. In January 1998 she travelled to Maze Prison and met with Johnny Adair and other Loyalist paramilitary leaders, challenging them to support the peace process. Mowlam’s face to face meeting with convicted murderers unleashed a media storm – but it also helped ease violence and bring radical Loyalists into the peace process.

Despite Mowlam’s important role in preparing the Good Friday negotiations she was sidelined during the talks. Some attribute this to her prickly relationship with leading Unionists; others believe her style was not appropriate for formal negotiations, or that her growing profile concerned Tony Blair.

Mowlam remained as Secretary of State for Northern Ireland until October 1999, when she was replaced by Peter Mandelson. She was given a lesser cabinet post and resigned from politics in frustration two years later. Mowlam died in August 2005 from the effects of a malignant brain tumour, a condition she had suffered from since 1997.