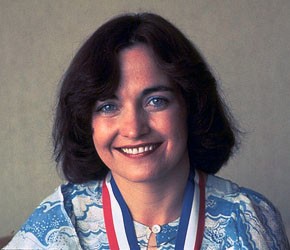 Mairead Corrigan (1944- ), also known as Maureen Corrigan-Maguire, is a Northern Ireland peace campaigner, co-founder of the Peace People and a Nobel Prize laureate.

Corrigan was one of eight children of Catholic parents, her father a Belfast window cleaner and her mother a housewife. The Corrigans lived in a Catholic slum in West Belfast, later relocating to Andersonstown.

Mairead was educated at a primary school on the Falls Road. She left school at age 14 to help the family financially, working as a babysitter and training as a secretarial typist. During her spare time, Corrigan volunteered with the Legion of Mary, a charitable organisation for Catholics. This social work included visiting internees in Long Kesh.

Days after the accident, Corrigan aligned with Belfast woman Betty Williams, who had started a campaign against sectarian violence. The two formed Women for Peace and between August and December 1976. Together they organised anti-violence rallies across Northern Ireland, the Republic of Ireland and Great Britain. Joined by journalist Ciaran McKeown, the group evolved into the Community of Peace People. Corrigan and Williams were awarded the 1976 Nobel Peace Prize for their activism.

In September 1981, Corrigan married Jacky Maguire, the husband of Anne Maguire, who took her own life the year before. Williams left the Peace People in 1980 but Corrigan-Maguire has continued her involvement.

The group has since broadened its focus and now campaigns against oppression and injustice around the world. Corrigan-Maguire has been particularly critical of United States and Israeli policy in the Middle East. She has also spoken out against abortion and euthanasia.

© Alpha History 2018. Content on this page may not be republished or distributed without permission. For more information please refer to our Terms of Use.
This page was written by Jennifer Llewellyn and Steve Thompson. To reference this page, use the following citation:
J. Llewellyn & S. Thompson, “Mairead Corrigan”, Alpha History, accessed [today’s date], https://alphahistory.com/northernireland/mairead-corrigan/.