Betty Williams (1943-2020) was a prominent peace activist who first emerged as a leader of the Community of Peace People in the mid-1970s. 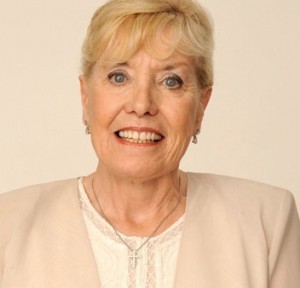 Williams was born Elizabeth Smyth in Belfast, the daughter of a Protestant butcher and a Catholic housewife. She was baptised a Catholic, educated at St Dominic’s Grammar and later employed as an office worker. She married Ralph Williams, an English Protestant, in 1961, taking his surname. They had two children, Paul and Deborah, before divorcing in 1982.

Like most Belfast residents, Betty Williams’ life was affected by sectarian violence. Her grandfather, a shipbuilder, was assaulted at work because his son was marrying a Catholic woman. Williams’ 18-year-old cousin Daniel, a medical student, was reportedly shot dead by Loyalist gunmen. Another cousin was killed while passing a Provisional Irish Republican Army (IRA) car bomb.

In the first years of the Troubles, Williams sympathised with Catholics and Nationalists, though she herself did not hold strong Republican views. After being arrested and harassed by British soldiers, Williams began supporting and aiding the IRA, even smuggling its volunteers across the border. She became disillusioned with the IRA after the July 1972 ‘Bloody Friday’ bombings and finally cut ties with the group after tending to a fatally wounded British soldier.

Williams’ political activism began after an incident in Belfast. In August 1976 an out of control car driven by a Provisional IRA fugitive, who had been shot by British troops, careered into a mother and her young children. The mother, Anne Maguire, survived but the three children, aged eight, two and six weeks, were killed. Williams was one of the first to arrive at the scene.

A distraught Williams began protesting against sectarian violence by distributing pamphlets and organising a women’s march. Within a few days, she had joined forces with Mairead Corrigan, the aunt of the dead children, and later by journalist Ciaran McKeown. This trio formed the Community of Peace People, later shortened to the Peace People.

The Peace People became one of Northern Ireland’s most prominent and successful peace movements. In mid August the group organised a 10,000 strong peace march through Belfast. More marches followed across Northern Ireland, the Republic of Ireland and Great Britain, each preceded by a solemn reading of the group’s peace pledge.

In late 1976, Williams and Corrigan were jointly awarded the Nobel Peace Prize for their attempts to end sectarian violence in Northern Ireland. Williams left the Peace People in 1980 following internal disputes over money and administration. She remarried and relocated to the United States while continuing her peace activism as a lecturer and visiting academic.

Williams later returned to reside in the Republic of Ireland. She died in Belfast in March 2020, aged 76.

Citation information
Title: “Betty Williams”
Authors: Jennifer Llewellyn, Steve Thompson
Publisher: Alpha History
URL: https://alphahistory.com/northernireland/betty-williams/
Date published: October 10, 2020
Date accessed: May 18, 2022
Copyright: The content on this page may not be republished without our express permission. For more information on usage, please refer to our Terms of Use.