’71 is a British motion picture, directed by Yann Demange and released in 2014. It stars Jack O’Connell as Gary Hook, Richard Dormer as Eamon, Sean Harris as Captain Browning and David Wilmot as Boyle. 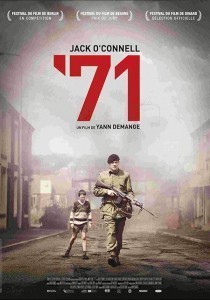 ’71 shows the Troubles through the eyes of young, experienced British soldiers. The screenplay was written by Gregory Burke, a Scottish playwright. Burke’s 2006 play Black Watch explored similar themes, depicting the experiences of Scottish soldiers in Iraq after the 2003 invasion. In ’71, the context is urban welfare in Belfast during the worst period of the Troubles.

The film’s main character, Gary Hook, is a young British private deployed in an interface area in Belfast. The inexperienced soldier is tasked with searching houses for weapons (a possible reference to Operation Demetrius in August 1971). Hook, who has seen no combat and knows little of Northern Ireland, is shocked by the conduct of his comrades and the abuse he receives from Catholic civilians.

The situation deteriorates rapidly when a rifle is stolen and Hook and another soldier pursue the culprit. The two find themselves isolated from their unit and lost in the backstreets of a Nationalist area. They are set upon by an angry mob and beaten. Hook’s colleague is then executed at point blank range by Haggerty, a member of the Provisional IRA.

Hook flees his attackers and is rescued by local Protestants, who take him to a Loyalist pub. While in the pub, he spots undercover British soldiers constructing a bomb. The bomb accidentally explodes, the pub is destroyed and Hook is injured by shrapnel. He flees again and is this time rescued by a Catholic family living in the notorious Divis Flats. Negotiations with the Official IRA follow before Hook is captured by the more radical and violent Provisionals. Meanwhile, members of Hook’s regiment race to locate him before he is executed.

Tense, fast-paced and at times brutally violent, ’71 is a confronting but effective depiction of Belfast during the Troubles. The film’s focus is on Private Hook, who finds himself in a situation he does not understand and cannot control. The suburbs of Belfast appear war-ravaged, oppressive and foreboding. The peripheral characters, their dialogue and actions suggest a complex political situation. British soldiers work undercover with Loyalists to construct bombs; the Official IRA and Provisional IRA are at loggerheads over control and strategy; the civilians Hook encounters are torn between helping him and handing him over to the IRA; British military commanders seem content to sweep it all under the carpet. Nobody, it seems, can be trusted.

While ’71 is fictional, and so lacks the historical basis of films like Bloody Sunday (2002), it does a tremendous job of depicting the chaos and confusion of the Troubles.

Citation information
Title: “’71 (2014)”
Authors: Jennifer Llewellyn, Steve Thompson
Publisher: Alpha History
URL: https://alphahistory.com/northernireland/71-2014/
Date published: February 25, 2018
Date accessed: February 12, 2020
Copyright: The content on this page may not be republished without our express permission. For more information on usage, please refer to our Terms of Use.

This website on Northern Ireland and the Troubles is created and maintained by Alpha History. It contains 192,305 words in 276 pages and was updated last on August 14th 2019. For more information, visit Alpha History or our Terms of Use.