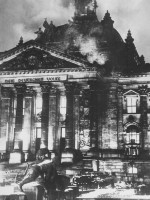 The Reichstag fire was a critical event in the expansion of Nazi power. It began with an arson attack on the legislature in Berlin and led to the Adolf Hitler and the NSDAP implementing emergency powers that effectively sidelined government democracy.

Adolf Hitler became chancellor at the end of January 1933 but his numbers in the government, and hence his grip on power, were both far from secure.

With 196 seats, the NSDAP had no absolute majority in the Reichstag and would have to rely on coalitions with other parties to pass legislation. The hostile Social Democrat Party (SPD) and Communist Party (KPD) held a combined 221 Reichstag seats, so could out-vote the Nazis.

Only three cabinet ministers, including Hitler himself, were Nazis. Many Landtags (state government assemblies) were still controlled by anti-Nazi parties, such as the SPD. Germany was still in the grip of economic depression, with industrial production shrinking and six million Germans unemployed.

Confronted with these challenges, Hitler’s prospects appeared little different to the 14 men who occupied the chancellorship before him. Yet within just a few weeks, the Nazi leader had dispensed with most restrictions on his power and laid the foundation for an absolute dictatorship.

The catalyst for this transformation was a destructive fire in the Reichstag building in Berlin. The halls of the building were discovered ablaze at around 9pm on February 27th 1933. Berlin’s fire brigade was quickly summoned and had the fire under control within two hours.

Despite their rapid response, fire gutted much of the building and destroyed the contents of many offices. Investigators found flammable material scattered around the building and there was evidence a chemical accelerant had been scattered on carpets.

While the Reichstag fire was undoubtedly arson, who was responsible remains one of history’s great mysteries. Berlin police arrested Marinus van der Lubbe, a simple-minded Dutchman found crouching half-naked at the rear of the building.

Marinus Van der Lubbe seemed the perfect suspect. He was found in possession of flammable material and fire-lighters; he had affiliations with underground communist movements. He also had a criminal record for arson. The Dutchman later confessed to police, claiming he was trying to incite German workers to rise up against the Nazis.

Yet there were also holes in van der Lubbe’s story. He was half-blind, dim-witted and incapable of complex planning. He also had a history of claiming responsibility for things he had not done.

Such was the volume of flammable material scattered around the building that van der Lubbe, assuming he was involved, could scarcely have carried it alone. It seems likely he was aided by others, either fellow communists or Gestapo agents, or perhaps installed as a ‘patsy’ to take responsibility for the work of others.

Regardless of who was responsible, Hitler seized upon the Reichstag fire as evidence of communist scheming and the means of extending his power over Germany.

Hitler, Josef Goebbels and vice-chancellor Franz von Papen had all arrived at the building as the fire was being extinguished. There they met Herman Goering, who was fulminating about it being a communist plot, possibly even a communist signal to initiate a revolution. Hitler told von Papen: “This is a God-given signal, Herr Vice-Chancellor”.

The following day, the Nazi leader declared a state of emergency and asked President Hindenburg to invoke Article 48 of the Weimar constitution. This emergency power authorised the president to rule by decree, to ensure public safety and order.

“Articles 114, 115, 117, 118, 123, 124 and 153 of the Constitution of the German Reich are suspended until further notice. It is therefore permissible to restrict the rights of personal freedom, freedom of opinion, including the freedom of the press, the freedom to organize and assemble, the privacy of postal, telegraphic and telephonic communications. Warrants for house searches, orders for confiscations as well as restrictions on property, are also permissible beyond the legal limits otherwise prescribed.”

The decree was worded so broadly it effectively allowed the Nazis to define their own legal limits. Hitler and his offsiders could marginalise political opponents by imposing restrictions on the press, banning political meetings and marches, and intercepting communications. The legal concept of habeas corpus was suspended, allowing the regime to detain suspected terrorists or revolutionaries without charge.

According to Douglas Reed, a British writer, “when Germany awoke, a man’s home was no longer his castle. He could claim no protection from the police, he could be indefinitely detained without charges; his property could be seized and his communications over-heard”.

As wide-ranging as it was, the Reichstag Fire Decree was only a temporary measure. Four weeks later, on March 23rd, the Nazis codified the terms of the decree by introducing the Enabling Act.

A short bill containing five articles, this Act allowed Hitler to govern without reference to the Reichstag. The chancellor and his ministers could rule by decree, bypassing the constitution, initiating taxes and spending and determining foreign policy, all without legislation or Reichstag approval.

The Enabling Act was presented as a five-year measure, scheduled to expire on April 1st 1937. Hitler appeared in the Reichstag the day before it voted on the Enabling Act, promising to use its powers to root out troublemakers and secure the state.

The act was eventually passed 444-94, meeting the required two-thirds margin. The Nazis rigged the vote by arresting dozens of communist and social democratic Reichstag members while striking a deal with the Centre Party. More than two-dozen Reichstag representatives did not attend the vote, after being intimidated and threatened by SA storm-troopers.

Neutral observers and the foreign press recognised the Reichstag Fire Decree and the Enabling Act as an opportunistic power-grab. One British cartoon depicted Hitler as Nero, with Hindenburg whispering “This is a heaven-sent opportunity, my lad. If you can’t be a dictator now you never will”.

The British and American press published ominous reports about the sweeping powers given to Hitler. Yet some also hinted that such a measure was inevitable, blaming the unrest on communists and expressing relief someone in Germany was now sufficiently empowered to deal with the threat of a communist revolution.

“The Enabling Act gave the executive branch full power to rule, which included creating and enforcing laws. Hitler vehemently declared that the laws the Nazi Party would implement were for the good of Germany and that the people of Germany would be relieved of their current economic problems. But Hitler declared that he could not do this without the Enabling Act.”
Everette Lemons

1. In late February 1933, a fire broke out in the Reichstag building in Berlin, gutting the interior and causing extensive damage.

2. The fire was condemned by leading Nazis such as Hitler and Goering as the work of communists, possibly to spark a revolution.

4. This emergency decree was followed in March by the Enabling Act, giving the Nazis dictatorial control for a five-year period.

5. The Reichstag passed the Enabling Act 444-94, due largely to anti-communist paranoia, deal-making with the Centre Party and SA intimidation.

Citation information
Title: “The Reichstag fire”
Authors: Jennifer Llewellyn, Jim Southey, Steve Thompson
Publisher: Alpha History
URL: https://alphahistory.com/nazigermany/the-reichstag-fire/
Date published: July 11, 2020
Date accessed: January 27, 2023
Copyright: The content on this page may not be republished without our express permission. For more information on usage, please refer to our Terms of Use.