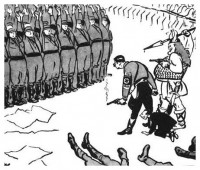 By mid-1934, Hitler seemed to be master of all Germany. He had banned opposition parties, taken control of the press, outlawed troublesome unions and thrown communists and other political dissidents into concentration camps. The Nazi grip on government extended across national, state and local levels. The only significant elements of Germany not subject to Nazi control or infiltration were the Reichswehr (military), wealthy industrialists and some higher levels of the bureaucracy. Hitler now attended to problems and potential threats within the Nazi movement, especially the Sturmabteilung (SA). The SA had played an important role in Hitler’s elevation to power, particularly during the three Reichstag elections of 1932-33. Around 50,000 SA members participated in these elections as polling booth attendants and sheriffs, which raised doubts about the validity of election results. SA storm-troopers also intimidated political opponents, broke up left-wing meetings and marches, threatened individuals, distributed party propaganda and tore down anti-Nazi material. Their activities led to a sharp rise in street violence which alarmed many Germans; some had voted for Hitler in the hope he would rein in the drunks and thugs of the SA.

But Hitler’s ascension to power neither quietened the rank and file of the SA or brought an end to street violence. This was in part because the SA grew rapidly after Hitler’s appointment as chancellor. In January 1933 the SA numbered around 500,000 men. Within just eight months its membership had blown out to 2.5 million; by January 1934 it was closer to 3 million. Some of this growth flowed from Hitler’s own political success: many joined the SA to be part of the rising Nazi movement. But SA leader Ernst Rohm was also responsible for the SA’s skyrocketing membership. Without endorsement from Hitler, Rohm worked to promote the SA, employing propaganda and recruiting aggressively. At Rohm’s order, the SA also swallowed up other militant right-wing groups, such as the Stahlhelm (‘Steel Helmet’), and acquired their members.

By mid-1934 numbers in the Nazi paramilitary branch had reached a staggering 4.5 million. As the SA grew it had to continually reorganise, putting in place new command structures and hierarchies. But the bulging SA was perpetually short of effective organisers and street-level commanders, which meant many local branches suffered from a lack of leadership and poor discipline in the ranks. Without elections to disrupt, unionists to beat up or communist meetings to gatecrash, some SA stormtroopers became bored and listless. They succumbed to drunkenness, carried out the destruction of private property and launched sporadic attacks on ordinary Germans. A few foreign diplomats were even assaulted by SA troopers, which drew protests from abroad.

With SA membership now rivalling the membership of the NSDAP itself, Hitler now faced an internal crisis. Some branches of the SA were almost out of control in German cities; their actions discredited the party, costing it local support and inviting negative press reports. Just as concerning to Hitler was the rhetoric of Ernst Rohm. The two veterans of the Munich putsch had been close friends (so much so that Rohm was probably the only Nazi who still addressed Hitler as “Adolf”, rather than “Mein Fuhrer” or “Herr Hitler”). But Hitler had appointed Rohm to lead the SA specifically to restore discipline and loyalty – a mission he had largely ignored. Now Rohm was sounding like one of the SA demagogues he was hired to eliminate.

“Adolf is a swine. He will give us all away. Getting matey with the East Prussian generals. We’ve got to produce something new, don’t you see? A new discipline. A new principle of organisation. The generals are a lot of old fogeys. They never had a new idea… I’m the nucleus of the new army, don’t you see that? Don’t you understand that what’s coming must be new, fresh and unused? The basis must be revolutionary. But Hitler puts me off with fair words.”
Ernst Rohm, 1934

By early 1934 Rohm’s personal popularity within the SA rivalled that of Hitler. The SA leader began to openly predict the end of the Reichswehr; he even went as far as questioning the Fuhrer’s orders. Hitler forced Rohm to sign a document acknowledging the Reichswehr as the nation’s supreme military force; in response, Rohm later described Hitler as a “ridiculous corporal”. By the spring of 1934 rumours had broken out in the NSDAP that Rohm and the SA might launch a revolution to supplant Hitler. Several Nazi leaders, pro-Nazi industrialists and Reichswehr generals urged Hitler to replace Rohm and do something about the SA. Deputy SS leader Reinhard Heydrich assembled a dossier on Rohm, much of it concerned with Rohm’s homosexuality (an attempt to disgust Hitler, who was vehemently homophobic). Heydrich also concocted evidence that Rohm agreed to accept a 12 million mark bribe from France, in return for plotting Hitler’s removal from power.

For weeks Hitler equivocated about what to do. A message from president Hindenburg, suggesting the old man was considering imposing martial law to deal with the SA, hustled Hitler into action. On June 30th 1934 he called on the fiercely loyal Schutzstaffel (SS), ordering them to arrest Rohm and dozens of other prominent SA leaders. Those arrested were either executed, shot resisting arrest or forced to commit suicide; the death toll was listed as 85 people, though it may have been much higher. The Nazis called this three-day wave of raids, arrests and deaths the ‘Rohm-putsch’, painting it as an operation to cleanse the party of corruption, decadence and homosexuality. Outside the party it became known as the ‘Night of the Long Knives’ – evidence of Hitler’s ruthless determination to cling to power, using violence to remove any perceived threat, even if it meant killing his closest friends.

Ernst Rohm was held in a prison cell for two days, while Hitler considered what to do with his former friend. In the end, Hitler gave the order for Rohm’s execution. SS officers presented Rohm with a pistol and invited him to commit suicide. When he refused, they shot him themselves. But it was not just the SA leadership who suffered during the ‘Night of the Long Knives’. Hitler also used it to eliminate political opponents and settle some old scores. Former chancellor Kurt von Schleicher, who was plotting the return of the Hohenzollern monarchy, was shot dead, along with his wife. Also gunned down was Erich Klausener, a decorated war veteran and Catholic politician, who had been strongly critical of Nazi violence. Gustav Ritter von Kahr, who refused to back Hitler in Munich in 1923 and later ordered his arrest, was another victim. The man who had engineered Hitler’s rise to power, vice-chancellor Franz von Papen, was arrested and removed from office.

In the aftermath of the July 1934 purges, Hitler weakened the SA so that it could never again break free from party control or threaten his leadership. Victor Lutze, a minor official with no political ambitions, was put in charge. Lutze organised the downsizing of the SA, disbanding scores of units and re-deploying talented men to the SS. By 1938 SA numbers had dropped to 1.2 million members – one-quarter of the numbers from four years before. The main beneficiary of this transformation was the Himmler-led SS, which replaced the SA as the NSDAP’s premier paramilitary branch. The SS was an elite organisation with strict entry requirements, so its numbers never reached those of the SA in 1933-34. Nevertheless, by the start of 1939 SS membership still exceeded 300,000 men.

1. Hitler’s rise to power in 1933 and the leadership of Ernst Rohm fuelled dramatic growth in SA membership.

2. The rapid growth and a shortage of street-level organisers made the SA hard to control, so street violence continued.

3. Against Hitler’s wishes, Rohm began to speak of the SA as a revolutionary army that may challenge the Reichswehr.

4. Faced with the prospect of martial law, in mid-1934 Hitler authorised the SS to move against Rohm and other SA leaders.

5. This purge claimed the lives of around 85 people. The SA was later downsized and weakened, while the SS became the party’s strongest paramilitary group.

Citation information
Title: “The ‘Night of the Long Knives'”
Authors: Jennifer Llewellyn, Jim Southey, Steve Thompson
Publisher: Alpha History
URL: https://alphahistory.com/nazigermany/the-night-of-the-long-knives/
Date published: July 14, 2015
Date accessed: September 17, 2021
Copyright: The content on this page may not be republished without our express permission. For more information on usage, please refer to our Terms of Use.