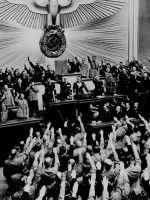 With its fascist doctrines and obsession with order, the Nazi state gave outward impressions of being an orderly, well-managed system of government with strong leadership and defined structures and roles. In practice, this was far from the case. The Nazi state was complicated, disorganised and shambolic, lacking clear planning, structure and responsibilities.

A significant reason for the chaos of the Nazi state is its lack of a framework. There was a myriad of high-ranking leadership positions, departments, ministries, agencies and security forces – but there was no Nazi constitution, no blueprint for effective government and no clear division of powers.

Hitler repeatedly tinkered with the organisation and structures of the state, creating new offices or departments and shifting responsibilities from one to the other – but there seemed to be little method or long-term planning involved in these decisions.

In the end, Nazi government ended up being what one historian described as “polycratic chaos”.

Perhaps the only political certainty in the Nazi state was Adolf Hitler’s status as its supreme decision-maker. According to the Nazi doctrine of fuhrerprinzip, all power and sovereignty were vested in the leader. He would exercise that power to create a Nazi state that would serve the needs of Germany and its people.

Hitler certainly possessed far more power than any other individual in the Nazi state – but he was a lazy and sometimes vague ruler who left much of the work to others. Hitler had no experience in government or bureaucracy, nor was he interested in administration, long-term planning or detailed policies. He preferred to dictate grandiose visions and vague orders, leaving the details and specifics to his subordinates.

Hitler’s great power but indifference to detail led to a culture of sycophancy within the Nazi leadership. Those who pleased Hitler by presenting him with good suggestions or policies were praised and rewarded. Some were welcomed into his inner circle, the highest accolade of all. High-ranking Nazis would pander to Hitler or even compete against each other to win his patronage.

During his rise to power, Hitler offered no clear vision of the structure or organisation a Nazi government might employ. Once ensconced in power, he ‘invented’ new departments or positions to deal with issues as they arose.

As a consequence, the Nazi state grew and evolved organically and haphazardly, with no real blueprint, skeleton or chain of command. Over time, it became a hotchpotch of bureaucracies, organisations and offices. The jurisdictions and responsibilities of these departments were not well defined.

In many cases, it was unclear who had ultimate responsibility for a given area and there was often ‘overlap’ or conflict between two or more departments.

The Reich Chancellery. Overseen by Hans Lammers and Hitler’s deputy, Rudolf Hess, the chancellery was the closest equivalent to a Nazi executive cabinet. It met regularly with Hitler and his other advisors, playing an important role in drafting legislation and policy, and making important decisions when Hitler was absent or unavailable. The chancellery was also responsible for Hitler’s finances and his movements; anyone wanting an audience with the Fuhrer had to go through the chancellery.

The Reich Interior Ministry. Headed by Wilhelm Frick, then Heinrich Himmler, this department was responsible for overseeing the internal organisation and security of Nazi Germany. It was given the task of ‘Nazifying’ existing government structures and departments, ensuring they were run by party members or sympathisers. The Interior Ministry also played a leading role in drafting and implementing racial laws and suppressing other political parties and opposition.

The Reich Ministry for Propaganda and Public Enlightenment. One of the most visible organs of Nazi rule, this department was created in 1933 and headed by the infamous Dr Joseph Goebbels. Its main function was to influence and manipulate public opinion, which it did through control of newspapers, film and radio. This ministry was also involved in organising the NSDAP’s huge public rallies in Nuremberg, as well as smaller events such as festivals and art shows.

The Reich Office of the Four-Year Plan. Headed by Hermann Goering, the Four-Year Plan was an economic program announced by Hitler in 1936. Its publicly stated aim was to make Germany self-sufficient by increasing agriculture, building, public works, roads and production of automobiles and synthetic materials. But it was also intended to prepare Germany for war, by speeding up armament and military production. The Four-Year Plan was so successful that this office remained in operation well into World War II after the plan had officially ended.

The German Labour Front (or DAF). Headed by Dr Robert Ley and twelve ‘trustees’, this department not only organised and co-ordinated the German workforce but acted as a state-run union for industrial workers. Factory employees were expected to be DAF members; it was almost impossible to obtain a job without membership. Most DAF workers wore paramilitary-style uniforms and their wages were set by DAF leaders. All other unions were banned.

Many groups outside the Nazi bureaucracy also shaped government policy. Germany’s wealthy industrialists were an influential lobby group because Hitler relied on their cooperation to achieve his program of rearmament. The upper echelons of the military also provided Hitler with feedback, advice and policy suggestions.

Also in the fuhrer’s ear were high-ranking party members, economics advisors, civilian ministers and politicians, Nazi Gauleiters in charge of the former German states, important academics and other experts.

Any of these people or groups could suggest an idea or policy that might catch Hitler’s eye and win his approval. He made these decisions as he saw fit, often on a whim and without consulting relevant branches of the government. There was no clear process of decision-making or policy formulation and little accountability.

Historians have long debated how and why the Nazi state evolved into this jumbled contraption of competing organisations. Two schools of thought have emerged, broadly called intentionalism and functionalism.

Intentionalist historians argue Hitler operated with a broad, pre-conceived plan. Every decision he made was done with a purpose. The intentionalists believe the creation of a confused and complex Nazi state was a deliberate ploy on Hitler’s part. It allowed him to ‘divide and rule’ by setting different groups against each other, thereby protecting or enhancing his own power.

The functionalist school contends Hitler had no such plan but simply made decisions on a day-by-day basis as they were put to him. Functionalist interpretations stress that division, competition and rivalries were important factors in the Nazi movement. They also query whether Hitler’s power was as absolute as is claimed by intentionalists, arguing that he often made decisions to protect his own position.

“The Nazi state has been depicted as a chaotic competition of power blocks – those Nazi and non-Nazi groups with influence: the SS, the Nazi party, the army, the conservative elites and Germany’s powerful industrialists. In fact, there was a coherence to this chaos: all competing groups and institutions were attempting to create policy in the Fuhrer’s name, according to what they believed to be the Fuhrer’s will.”
Martin Collier, historian

1. The Nazi state gave outward appearances of order, organisation and discipline – but in reality, it was a confused jumble of departments, agencies and powers.

2. There was no Nazi constitution or framework of government. Instead, Hitler appointed ministers or invented departments as they were suggested, leaving the details to others.

3. As a result, the Nazi state grew organically and haphazardly into a patchwork of conflicting departments, without an obvious structure or clear delineation of powers.

4. Many politicians, bureaucrats and military officers competed for Hitler’s favour, leading to a culture of sycophancy, self-interest and corruption.

5. There is considerable debate between intentionalist and functionalist historians about how and why the Nazi state became so uncoordinated and chaotic.

Citation information
Title: “The Nazi state”
Authors: Jennifer Llewellyn, Jim Southey, Steve Thompson
Publisher: Alpha History
URL: https://alphahistory.com/nazigermany/the-nazi-state/
Date published: July 15, 2020
Date accessed: November 27, 2022
Copyright: The content on this page may not be republished without our express permission. For more information on usage, please refer to our Terms of Use.