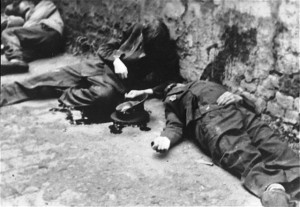 The Warsaw Ghetto uprising was a significant attempt to resist Nazi brutality in Poland. It was carried out by a small but well organised and determined group of Jewish partisans, using weapons stolen or purchased on the black market.

Resisting or rebelling against Nazi occupation forces anyway in Europe was both very difficult and incredibly dangerous. The Schutzstaffel (SS) was a pervasive and brutal force that did not uphold or abide by the rules of war.

SS commanders had access to extensive information gathered by the Sicherheitsdienst, an intelligence-gathering division, as well as the Gestapo (secret police). SS interrogators would use any means possible to extract information, including torture and threats against the victim’s family.

Significantly, attacks against Nazi forces were usually met with vicious and disproportionate reprisals. The murder of an SS officer in a Polish village, for example, might lead to the execution of 50 civilians in that village.

Despite the risks of danger and reprisals, resistance groups continued to operate and assassinations and uprisings against the Nazis continued to occur.

The most successful Jewish-led insurrection against the Nazis occurred in Jewish ghetto located in the Polish capital, Warsaw.

In October 1940, all Jews in the city – numbering around 400,000 people, or 30 per cent of the city’s entire population – were ordered from their homes. They were forced into a walled ghetto covering barely two per cent of the city’s entire area. Inside, Jewish families were compelled to live in overcrowded apartments and tenements, with inadequate accommodation, sewage and other facilities.

Between July and September 1942, about 265,000 of the Jews living in the ghetto were deported. Most were eventually murdered in the gas chambers of Treblinka, north-east of Warsaw. A further 12,000 Jews were relocated to forced labour camps while another 10,000 were killed by SS soldiers during the process of deportation.

Approximately 35,000 Jews were permitted to remain in the ghetto, along with another 20,000 who remained behind in hiding.

News filtered back to the ghetto about Treblinka and the grim fate of Jews who were sent there. As those in the ghetto faced eventual deportation and extermination, they began to form resistance groups.

The largest of these resistance movements was called the ZOB (Zydowska Organizacja Bojowa, or Jewish Fighting Organisation).

In the autumn of 1942, the ZOB began acquiring rifles, pistols, grenades and explosives, mostly from members of the Polish resistance or through the black market. These weapons were smuggled into the walled ghetto and stockpiled in underground niches.

In January 1943, with another round of Nazi deportations imminent, the ZOB issued this challenge to Jews in the ghetto:

“We are rising up for war! We are of those who have set themselves that aim of awakening the people. Our wish is to take this watchword to our people: Awake and fight! Know that escape is not to be found by walking to your death passively, like sheep to the slaughter. It is to be found in something much greater: in war! Whoever defends himself has a chance of being saved! Whoever gives up the self-defence from the outset – he has lost already! Nothing awaits him except only a hideous death in the suffocation-machine of Treblinka. Let the people awaken to war! Find the courage in your soul for desperate action! Put an end to our terrible acceptance of such phrases as: We are all under sentence of death!”

When removals to Treblinka resumed on January 18th 1943, a small group of Jewish resistance fighters broke formation and attacked soldiers of the Waffen-SS overseeing the deportation. The Jewish militia suffered heavy losses in the battle but German casualties were also substantial. The SS was forced to suspend its operation in the ghetto with only 5,000 of the scheduled 8,000 deportations completed.

Somewhat surprised at their success, the Jewish ghetto resistance began to believe they could hold off the SS for a longer period. Resolving to take up the fight again, they stockpiled more weapons, drew up battle plans, organised underground supply lines, dug bunkers and constructed fighting posts.

The SS returned on April 19th 1943 with orders to completely liquidate the ghetto within three days. Finding the ghetto seemingly deserted, SS troopers entered cautiously but were ambushed by Jewish resistance fighters led by Mordechai Anielewicz. Stunned by both the ferocity and the coordinated nature of this attack, the SS retreated and took cover behind the ghetto walls.

The outraged commander of the German forces, SS-Brigadefuhrer Jurgen Stroop, ordered the complete demolition of the ghetto, building by building. Flame-throwers, smoke grenades and tear gas were brought in to flush out Jewish partisans hiding in sewers and basements.

During this action, many Jews were suffocated to death or burned alive as the ghetto was gradually reduced to rubble, torched or dynamited. One Jewish resistance fighter later said, “It was the flames that defeated us, not the Germans”. Later, sniffer dogs were brought in to locate Jewish partisans, as well as women and children, still hiding in the rubble.

For the next fortnight, into early May 1943, the ZOB launched sporadic attacks against the Germans. The SS’s superior armaments, intelligence, supplies and reinforcements allowed it to gradually gain the upper hand over the shrinking Jewish resistance.

On May 8th 1943, the ZOB headquarters on Mila Street was captured. Several of its leaders, including Anielewicz, committed suicide by taking cyanide. A small band of 43 resistance fighters avoided capture and escaped through the sewers of Warsaw to a nearby forest.

According to Stroop’s records, his forces killed 7,000 Jews in just under a month of fighting. On May 16th 1943, Stroop ordered the Jewish synagogue outside the ghetto to be dynamited as a symbol of his victory. His internal SS daily report, written that very day, stated:

“180 Jews, bandits and sub-humans, were destroyed. The former Jewish quarter of Warsaw is no longer in existence. 7,000 remaining Jews in the ghetto were rounded up and deported immediately to Treblinka where their death in the gas chambers was carried out swiftly.”

It took the German Wehrmacht just one week to conquer Poland in September 1939 – but it took 28 days for the elite SS to capture the Warsaw ghetto. The ZOB’s courageous defiance inspired Jews elsewhere to resist and fight, rather than march to their death in the gas chambers.

In August 1943, several hundred Jews in the Bialystok Ghetto in northern Poland followed the lead of their compatriots in Warsaw. Armed with a stolen machine gun, a few pistols and other makeshift weapons, the Bialystok Jews fought for several days before being overrun by the SS.

In a Jewish ghetto in Nazi-occupied Minsk (Russia), around 10,000 inmates were able to escape the camp and link up with Soviet partisans. August 1943 also produced uprising within the Treblinka death camp itself. Guards were killed, buildings set alight and several hundred inmates escaped.

The most successful Jewish uprising occurred at the Sobibor extermination camp in October 1943. Inmates there secretly killed several SS officers and guards then launched an escape attempt, allowing around 600 Jews to flee the camp. This uprising has been depicted in two films, Escape from Sobibor (UK, 1987) and Sobibor (Russia, 2018).

“What we have experienced cannot be described in words. We are aware of one thing only: what has happened has exceeded our dreams. The Germans ran twice from the ghetto… Jewish self-defence in the Warsaw ghetto has become a fact. Jewish armed resistance and the retaliation have become a reality. I have witnessed the magnificent heroic struggle of the Jewish fighters.”
Mordecai Anielewicz

1. Thousands of Jews were relocated to a tiny ghetto in the Polish capital, Warsaw, then in mid-1942 began to be shipped to the nearby Treblinka death camp.

2. Hearing stories of what was occurring at Treblinka, Jews in the Warsaw ghetto began to prepare for armed resistance to future deportations.

3. Beginning in April 1943, the Warsaw ghetto uprising successfully kept the SS at bay for almost a month, led by the ZOB and individuals like Mordecai Anielwicz.

4. Superior firepower and supplies saw the SS prevail, however, and most resistance leaders either fled, committed suicide or were killed.

5. The events in Warsaw inspired other Jewish uprisings in Bialystok, Minsk, Treblinka and Sobibor, the last of which was the most successful.