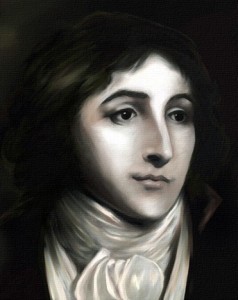 Louis Saint-Just (1767-1794) was a radical Jacobin, a member of the National Convention and the young ally of Maximilien Robespierre.

As a teenager, Saint-Just was intelligent and well read but restless, promiscuous and disobedient. In 1786 he brought disgrace to his family by stealing some silver, an offence that earned him a stint in prison.

When the Bastille fell in 1789, Saint-Just was jobless, broke and living with his mother, Despite this, he took a strong interest in the revolution, joining a local unit of the National Guard.

Around this time, Saint-Just also began corresponding with Maximilien Robespierre, on whom he lavished praise. He became Robespierre’s protege and their friendship and political allegiance strengthened over time.

In September 1792, Saint-Just entered the National Convention, where he condemned monarchy, voted for the king’s execution and urged the arrest of the Girondin deputies. In mid-1793, he was appointed to the Committee of Public Safety, where for a year he served as Robespierre’s trusty lieutenant.

Though only in his mid-20s, Saint-Just played a pivotal role in the arrest and execution of Georges Danton and the Indulgents, and in the emergence of the Reign of Terror.

Like Robespierre, Saint-Just fell from power in July 1794 and died beneath the guillotine, the place to where he had condemned so many others.

Citation information
Title: “Louis Saint-Just”
Authors: Jennifer Llewellyn, Steve Thompson
Publisher: Alpha History
URL: https://alphahistory.com/frenchrevolution/louis-saint-just/
Date published: May 26, 2017
Date accessed: January 31, 2023
Copyright: The content on this page may not be republished without our express permission. For more information on usage, please refer to our Terms of Use.