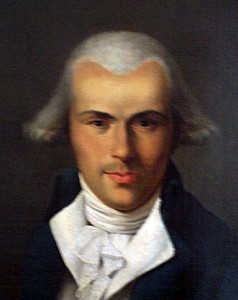 Jean-Joseph Mounier (1758-1806) was a French politician and jurist who had a significant role in the first months of the revolution.

Mounier was born in Grenoble, the son of a cloth manufacturer. His family was affluent enough for Mounier to undertake studies in law, during which time he became friends with Antoine-Pierre Barnave.

Mounier took up a magistracy in his native Grenoble before being swept up in the unfolding revolution in 1788. He oversaw the writing of local cahiers and penned essays condemning the parlements and urging national political reform. Mounier was elected to represent the Third Estate at the Estates-General, where he advocated voting by head.

In the summer of 1789, Mounier appeared at the forefront of the revolution. He suggested the famous Tennis Court Oath, sat as a member of the National Assembly, chaired its constitutional committee and, in September, became the Assembly’s president.

Despite these achievements, Mounier was a constitutional monarchist who remained loyal to the king. The treatment of the royal family in October 1789, followed by the government’s insipid response, horrified him.

Mounier resigned from the National Assembly later that month and returned to his native Grenoble. In May 1790, he was forced to take exile in Switzerland, where he remained until 1801. He returned to France and served in Napoleon‘s government briefly until his death in 1805.

Citation information
Title: “Jean-Joseph Mounier”
Authors: John Rae, Steve Thompson
Publisher: Alpha History
URL: https://alphahistory.com/frenchrevolution/jean-joseph-mounier/
Date published: May 16, 2017
Date accessed: May 30, 2020
Copyright: The content on this page may not be republished without our express permission. For more information on usage, please refer to our Terms of Use.

This French Revolution site contains articles, sources and perspectives on events in France between 1781 and 1795. This site is created and maintained by Alpha History. It contains 230,541 words in 354 pages and was last updated on May 27th 2020. For more info, visit our FAQ page or Terms of Use.