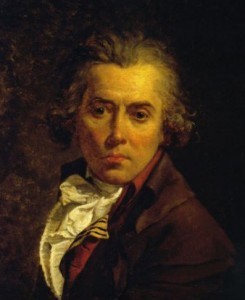 Jacques-Louis David (1748-1825) was one of the most famous French artists of his time. He is particularly well known for numerous works that reflect the ideas and values of the revolution.

Born to an affluent Parisian family, the young David was an irascible and mediocre student but showed a strong aptitude for drawing and painting. At age 18, he was accepted into the Royal Academy, where his painting developed along neo-classical lines.

By the outbreak of the revolution, which David fervently supported, he had become France’s leading artist. A long-standing member of the Jacobin Club, David was elected to the National Convention in 1792.

During his time in the Convention, David backed the execution of Louis XVI; served as a member of the Committee of Public Safety; and sat in the chair as president of the Convention.

Closely aligned with Robespierre, David oversaw plans for the Festival of the Supreme Being in June 1794. He was arrested after Robespierre’s deposition but managed to escape the Thermidorian recriminations.

Though he played an important political role in the revolution, David is, of course, better known for his artistic contributions, particularly his haunting representation of the death of Jean-Paul Marat.

Citation information
Title: “Jacques-Louis David”
Authors: John Rae, Steve Thompson
Publisher: Alpha History
URL: https://alphahistory.com/frenchrevolution/jacques-louis-david/
Date published: May 19, 2017
Date accessed: January 20, 2020
Copyright: The content on this page may not be republished without our express permission. For more information on usage, please refer to our Terms of Use.

This French Revolution site contains articles, sources and perspectives on events in France between 1781 and 1795. This site is created and maintained by Alpha History. It contains 230,537 words in 354 pages and was last updated on October 23rd 2019. For more info, visit our FAQ page or Terms of Use.