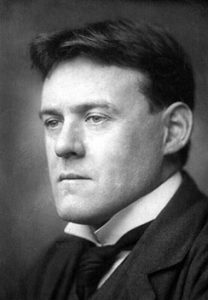 Hilaire Belloc was a French-born British historian and writer, prolific in the first half of the 20th century.

Joseph Hilaire Pierre Belloc was born in north-central France, days after the outbreak of the Franco-Prussian War. His English mother, Bessie Rayner Parkes, was a prominent women’s activist who married Louis Belloc, a French lawyer.

Louis Belloc died in 1872 so Parkes and her infant son returned to England. Hilaire Belloc was raised and educated in rural Sussex and Birmingham. After a term of service in the French military, he completed a first-class honours degree in history at Oxford. In 1906, Belloc stood as a Liberal candidate for the British Parliament, serving one term in the House of Commons as the Member for Salford South.

Belloc married an American woman, Elodie Hogan, in 1896. The couple had five children before Hogan’s death in 1914. The grief-stricken Belloc never remarried but threw himself into his writing. He was a prolific yet diverse author, penning more than 150 books across several genres, including economic theory, travelogues, poetry and children’s literature.

Bellock wrote several books on the French Revolution, including a popular biography of Marie Antoinette and a 1911 history that for years served as a staple text in schools. A devout Catholic, his personal religious values are evident in these works.

Despite this, his perspectives of the revolution are primarily liberal and not dissimilar to 19th-century historians like Jules Michelet. Belloc saw the French Revolution as inevitable, an upheaval needed to overturn the corrupt and ineffectual power structures of the Ancien Régime which “had become stiff with age”. He was a champion of Enlightenment ideas, particularly those of Rousseau, and considered the revolution an expression of the general will.

Belloc did not consider Catholicism a cause of the revolution, nor did he believe that Catholicism was incompatible with the new regime. Instead, he believed the French Catholic church had been corrupted by royal and aristocratic influences, which had exploited the Church for their own purposes.

“No one man makes a people or their creed, but Rousseau more than any other man-made vocal the creed of a people, and it is advisable or necessary for the reader of the Revolution to consider at the outset of his reading of what nature was Rousseau’s abundant influence upon the men who remodelled the society of Europe between 1789 and 1794.”

“Few men are possessed of the eye, the subtle sympathy, the very rapid power of decision, and the comprehension of human contrasts and differences which build up the apt leader of an armed force great or small. Most men are mediocre in the combination of these qualities. But Louis [XVI] was quite exceptionally hopeless where they were concerned.”

“Another hole in [Louis XVI’s] character was his inability to grasp in a clear vision any general social problem. Maps he could well comprehend and he could well retain statistics; but the landscape, as it were, of the Revolution his protuberant and lethargic eyes completely missed. He was quite unable to see where lay danger and where support, in what large masses such and such forces were grouped, and the directions in which they were advancing, or upon which they must retreat.”

“Had she [Marie Antoinette] been a woman lacking in energy or in decision, this alien character in her would have been a small matter and her ignorance of the French in every form of their activity, or rather her inability to comprehend them, would have been but a private failing productive only of certain local and immediate consequences, and not in any way determining the great lines of the revolutionary movement. As it was, her energy was not only abundant but steadfast; it grew more secure in its action as it increased with her years, and the initiative which gave that energy its course never vacillated but was always direct. She knew her own mind, and she attempted, often with a partial success, to realise her convictions.”

“The reader must seize that moribund condition of the religious life of France upon the eve of the Revolution… The swoon of the Faith in the 18th century is the negative foundation upon which the strange religious experience of the French was about to rise. France, in the generation before the Revolution, was passing through a phase in which the Catholic Faith was at a lower ebb than it had ever been since the preaching and establishment of it in Gaul.”

“The immediate peril of the State was financial. The pretext and even to some extent the motive for the calling of the Estates-General was the necessity for finding money. The old fiscal machinery had broken down, and as always happens when a fiscal machine breaks down, the hardship it involved, and the pressure upon individuals which it involved, appeared to be universal. There was no immediate and easily available fund of wealth upon which the Executive could lay hands, save the wealth of the clergy.”

“The National Assembly was now legally constituted, and set out upon its career. The Crown, the old centre of authority, had abandoned its position and had confirmed the Revolution, but in doing so it had acted as it were in contradiction with itself… It was evident that some counter-stroke would be attempted to restore the full powers of the Crown.”

“This recapture of the King by Paris [in October 1789] is much more significant than a mere impulse of the mob. The King in Paris, the unison of his person with the capital city, had been the very sacrament of French life for century upon century. It was precisely a hundred years since Paris had been abandoned by Louis XIV for Versailles. The significance of that error may be understood [by a future historian] when he describes how the wealthy manufacturers abandoned the cities in which their wealth was made, to dwell outside and apart from the living interests of their people.”

“The men who framed the Constitution of the Clergy… all had at the back of their minds three conceptions which they were attempting to reconcile. Of those three conceptions one was wholly wrong, one was imperfect because superficial, the third alone was true. And these three conceptions were: first, that the Catholic Church was a moribund superstition; secondly, that it possessed in its organisation and tradition a power to be reckoned with; and thirdly, that the State, its organs, and their corporate inheritance of action, were so bound up with the Catholic Church that it was impossible to effect any general political settlement [without reforming the Church].”

“The desire of the men of 1789 was not to kill the Church but to let it die; they thought it dying. Their desire was only to make that death decent and of no hurt to the nation and to control the political action of a hierarchy that had been wealthy and was bound up with the old society that was crumbling upon every side.”

“The Civil Constitution of the Clergy failed: it lit the civil war, it dug the pit which divided Catholicism from the Revolution at the moment of the foreign invasion, it segregated the loyal priest in such a fashion that his order could not but appear to the populace as an order of traitors, and it led, in the furnace of 1793, to the great persecution from the memories of which the relations between the French democracy and the Church have not recovered.”

This French Revolution site contains articles, sources and perspectives on events in France between 1781 and 1795. This site is created and maintained by Alpha History. It contains 230,541 words in 354 pages and was last updated on June 11th 2020. For more info, visit our FAQ page or Terms of Use.