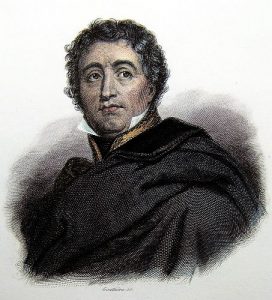 François-Noël Babeuf (1760-97) was a radical journalist and political activist during the later stages of the French Revolution. He is best known for leading a failed plot against the government of the Directory in 1796.

Babeuf was born in St Quentin in the northern province of Aisne, the son of a soldier. Despite receiving little education, as a teenager, he gained employment as a clerk. He was later apprenticed to a feudist (an expert in seigneurial law) and became qualified in that field.

Despite making his living from feudalism, Babeuf was a political radical who argued against it. In early 1789, he drafted a cahier for the Third Estate in Roye that called for the abolition of feudal rights. Babeuf lived in Paris at the height of the revolution in mid-1789, calling for sweeping political and economic reforms.

Babeuf returned to northern France in October 1789 but two years later was back in Paris. He became a prolific writer and political activist, known for his radicalism. He ran foul of the revolutionary government several times, enduring arrest and detention.

After the fall of Robespierre, Babeuf started a radical newspaper called Le Tribun du Peuple and used the pen name ‘Gracchus’ to attack Thermidorian moderates and capitalists. He escalated his attacks on the government after the Directory’s abolition of fixed prices worsened conditions in Paris. He defended the aims of the Terror (though not necessarily the methods) and attacked the Thermidorians and the Directory for protecting landed and capitalist interests.

Babeuf also promoted ideas that today might constitute socialism or communism, including the common ownership of property, the equal distribution of goods, class warfare and the absolute equality of women.

As the food crisis in Paris worsened in early 1796, these writings became more extreme. A February edition of his paper outraged many – including surviving Jacobins – by calling for another “September 2nd” (a reference to the September Massacres) against the government and its supporters. Babeuf attacked the Thermidorians and the Directory for protecting capitalist interests and ignoring the needs of ordinary Parisians.

By April, he was at the head of a group calling itself the Conjuration des Égaux (‘Conspiracy of Equals’). Rumours began to circulate that Babeuf and his followers, supported by disaffected soldiers, would soon launch a coup d’etat to overthrow the Directory.

The government decided to act, arresting Babeuf and other Égaux on May 10th. They were detained for a year before being put on trial. Most were acquitted or escaped with prison terms or deportation, however, Babeuf was guillotined on May 27th 1797.

Citation information
Title: “Francois Babeuf”
Authors: John Rae, Steve Thompson
Publisher: Alpha History
URL: https://alphahistory.com/frenchrevolution/francois-babeuf/
Date published: May 2, 2019
Date accessed: December 01, 2020
Copyright: The content on this page may not be republished without our express permission. For more information on usage, please refer to our Terms of Use.

This French Revolution site contains articles, sources and perspectives on events in France between 1781 and 1795. This site is created and maintained by Alpha History. It contains 231,429 words in 354 pages and was updated on December 2nd 2020. For more info, visit our FAQ page or Terms of Use.