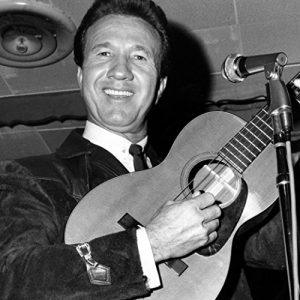 Born in Arizona, Robbins joined the United States Navy and served in the Pacific theatre during World War II. After his discharge, he returned to Arizona and made a living performing in local bars and clubs. He later became a presenter on radio and television and signed a record deal with Columbia.

Robbins is best known for his signature song, the Western-themed El Paso, as well as the popular ballad A White Sports Coat (and a Pink Carnation).

In 1966, Robbins wrote and recorded Ain’t I Right, a song that takes aim at communists (“a bearded, bathless bunch”), protestors (“tramps”) and “two-faced politicians”. Robbins reportedly wanted Ain’t I Right released as a single but studio bosses refused, declaring it too provocative and far too political.

Robbins later became a NASCAR driver and had some success with this. He died in 1982.

You came down to this southern town last summer
To show the folks a brand new way of life
But all you’ve shown the folks around here is trouble
And you’ve only added misery to their strife
Your concern is not to help the people
And I’ll say again, though it’s been often said
Your concern is just to bring discomfort, my friend
And your policy is just a little red

It matters not to you how people suffer
And should they, you’d consider that a gain
You bring a lot of trouble to the town and then you leave
That’s part of your communistic game
I detect a little communism
I can see it in the things ya do
Communism, socialism call it what you like
There’s very little difference in the two

Your followers sometimes have been a bearded, bathless bunch
There’s even been a minister or two
A priest, a nun, a rabbi and an educated man
Have listened and been taken in by you
Aw, the country’s full of two-faced politicians
Who encourage you with words that go like this
Burn your draft card if you like, it’s good to disagree
That’s a get acquainted communistic kiss

One politician said it would be nice to send some blood
And help the enemy in Vietnam
That’s what he says, here’s what I say, let’s just keep the blood
Instead let’s send that politician man
Let’s rid the country of the politicians,
Who coddle tramps that march out in our streets
Protesting those who wanna fight for freedom, my friend
This kind of leader makes our country weak

Content on these pages is © Alpha History 2019. Songs are hosted on Youtube and the copyright for music and lyrics is retained by its original creators and/or rightsholders. For more information please refer to our Terms of Use.

This Cold War site contains articles, perspectives and sources on global events and tensions between 1945 and 1991. This site is created by Alpha History and contains 309,599 words in 407 pages. It was updated on April 14th 2020. For more information, visit our FAQ page or Terms of Use.