John Paul II (1920-2005) was Pope, or head of the Roman Catholic church, between 1978 and 2005. During the final decade of the Cold War, John Paul II’s opposition to communism inspired democratic and religious movements in Europe, particularly in his native Poland. 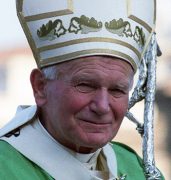 John Paul II was born Karol Wojtyla in southern Poland, the son of a military officer and a school teacher. Wojtyla lived through the occupation of Poland in the 1940s and was forced to work for the Nazi regime. He decided to enter the priesthood, enrolling in an underground seminary in 1942. Wojtyla was ordained as a priest in 1946 and was posted to Krakow, not far from his hometown. He was appointed the bishop of Krakow in 1958, archbishop in 1964 and cardinal in 1967.

After the sudden death of John Paul I in 1978, Wojtyla was elected Pope. He was the first non-Italian Pope in 455 years, and at 58 was the youngest since the mid 19th century. Wojtyla adopted the papal name John Paul II, in honour of his predecessor.

Unlike earlier popes John Paul II was politically outspoken, often speaking in defence of oppressed peoples and minorities. He offered strong criticism of anti-democratic governments, such as the Nationalist government in South Africa, Augusto Pinochet’s dictatorship in Chile and other oppressive regimes in Africa, the Caribbean and South America.

Though he did not attack the Soviet Union or its leaders directly, John Paul II condemned communism as a way of thinking. His remarks proved particularly inspirational for the people in his native Poland, where he urged Catholics and others opposed to communism to “change the image of this land”. It is no coincidence that the first organised opposition to communism (Lech Walesa’s Solidarnosc) took shape in Poland in the early 1980s, in the first years of John Paul II’s papacy. The Pope was a vocal supporter of Solidarnosc and, according to some, secretly provided it with financial support.

John Paul II’s political activism also made him a target. The communist government in Poland attempted to discredit the Pope by alleging he had fathered an illegitimate child. In May 1981, John Paul II, while touring St Peter’s Square in the Vatican in an open-topped car, was shot in the abdomen by a lone gunman. The Pope narrowly survived while the gunman, Turkish militant Ali Agca, was captured and sentenced to life in prison. According to experts then, and several historians since, Agca was acting with the support – and possibly under the direct orders – of Soviet intelligence agencies.

John Paul II suffered from poor health in his final years, after being diagnosed with Parkinson’s Disease in 2001. He continued to carry out his duties but had great difficulty walking and speaking. The Pope died in April 2005 and his funeral was attended by heads of state and dignitaries from all around the world, including three US presidents and former Polish president Walesa.