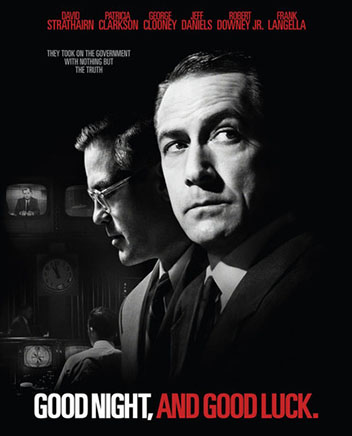 Good Night, and Good Luck is set at the height of McCarthyism, when being named as a suspected communist or communist sympathiser was enough to shatter someone’s career and reputation. The film’s storyline, which depicts real people and actual events, focuses on how American television network CBS and several of its broadcast journalists helped expose Joseph McCarthy and his campaign as a ‘witch hunt’, at some personal risk to themselves. Clooney, who studied journalism at college and was the son of a Cold War-era newsreader, was the driving force behind the movie.

Good Night, and Good Luck opens in 1953, a time when McCarthy’s influence was ascendant and television journalism was in its early days. The film’s central character is Edward R. Murrow, a journalist of considerable standing. Murrow airs the story of Milo Radulovich, an Air Force officer who is discharged when members of his family are exposed as communists.

This story brings Murrow and his program to the attention of McCarthy, who condemns them for being sympathetic to communism. Murrow, however, is determined to push on and expose the fraudulent nature of McCarthy’s character assassinations. Concerned about further accusations from McCarthy and the commercial implications for the network, executives warn Murrow to tread carefully and remain balanced. Murrow responds by disputing the suggestion that “every issue has two equally reasonable sides to it”.

Good Night, and Good Luck received much critical praise and was nominated for six Academy Awards, including Best Picture. It was shot in high contrast black-and-white which, given its subject matter, lends the film a feeling of authenticity. Joseph McCarthy is not portrayed by an actor but is cleverly integrated into the movie through snippets of archival footage.

The focus of Good Night, and Good Luck is more on journalism than politics. It is less about McCarthyism than how it was deconstructed and defeated. As a consequence, it is a ‘wordy’ film with a great deal of dialogue and political debate. Historiographically, the film does remain close to historical fact but, as some critics have noted, it does overemphasise Murrow’s role in ending McCarthyism.

Citation information
Title: “Good Night, and Good Luck (2005)”
Authors: Jennifer Llewellyn, Steve Thompson
Publisher: Alpha History
URL: https://alphahistory.com/coldwar/good-night-and-good-luck-2005/
Date published: August 7, 2020
Date accessed: August 15, 2022
Copyright: The content on this page may not be republished without our express permission. For more information on usage, please refer to our Terms of Use.