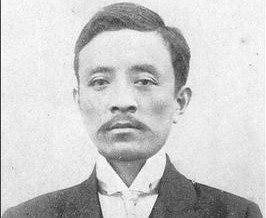 Song Jiaoren (1882-1913, Wade-Giles: Sung Chiao-jen) was a republican revolutionary and an important figure in the post-1911 national government.

Born in Hunan province, Song was educated in history, politics and the arts. He went on to work as a teacher before embarking to Japan for further study, where he met Sun Yixian and became a foundation member of the Tongmenghui.

Song returned to China and participated in the military uprisings of 1911 – but his most important contribution was to oversee the formation of the Guomindang and its organisation into a formal political party.

In 1912, he became president of the newly formed Guomindang and was appointed to the interim republican government. By early 1913, Song seemed a prime candidate for the prime ministership.

Song’s constant push for a reduction in presidential powers became an aggravation to Yuan Shikai. In March 1913, Song was assassinated in Shanghai, probably on Shikai’s orders.