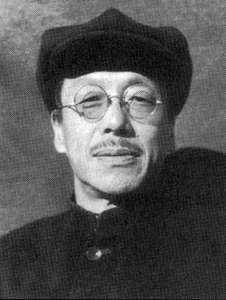 Kang Sheng (1898-1975, Wade-Giles: K’ang Sheng), was a senior member of the Chinese Communist Party (CCP) and head of the party’s intelligent bureau or secret police for more than three decades.

Kang was born into a land-owning family in Shandong province and attended a boys’ elementary school. He later studied at a German School in Qingdao, taught in a rural school, travelled to Europe, enrolled at Shanghai University and joined the CCP.

He became an active labour organiser, participating in activities against the Guomindang and managing to escape Jiang Jieshi‘s clutches during the Shanghai Massacre in April 1927.

Kang was arrested in 1930 but was later released. He returned to CCP ranks and was eventually given charge of the Special Work Committee that oversaw the party’s intelligence and security operations.

In 1933, Kang went to Soviet Russia, where he became involved in the Comintern and worked closely with the Soviet secret police (NKVD). He was elected to the CCP Politburo in absentia and established a party agency called the Office for the Elimination of Counter-Revolutionaries, which targeted Chinese living in Russia. He acquired both power and experience in dealing with witnesses and liquidating alleged traitors.

Kang returned to China in November 1937, carrying Joseph Stalin’s orders to bring the CCP back in line with Soviet policies and to maintain the Second United Front against the Japanese. In Yan’an, Kang aligned himself with Mao Zedong, after recognising Mao as the party’s likely leader.

Kang’s insight into Soviet motivations in China, coupled with his support for Mao’s wife Jiang Qing, contributed to his rise within the party hierarchy. In Yan’an, Kang oversaw intelligence operations against the Japanese, the Guomindang and within the party. He was a key figure in the Yan’an Rectification Campaign, overseeing interrogations and torturous punishments of party members.

Kang was removed from some of his security positions in 1945 but he turned his focus towards the hated landlords, encouraging peasants to kill them and rich peasants during the land reforms of the late 1940s.

Kang’s legacy of retribution and brutality continued in the new society beyond 1949. Between 1950 and 1954 he virtually disappeared from public view, theoretically because he was unwell. For a time ranked sixth in the party hierarchy, he began to drop down the list rather dramatically – but by May 1956 he was back in public view and had regained his position.

Kang was rewarded for his support of Mao during the Great Leap Forward (1958-1961) by being given important positions. He was involved in the purge of Peng Zhen following the Hai Rui Dismissed from Office furore in 1966. He held the positions of Head of the Organisation and Propaganda Leading Group, advisor to the Cultural Revolution Group and Head of the CCP Propaganda Department.

Kang also played a leading role in the subjugation of the Red Guards after their excesses early in the Cultural Revolution. As a member of the Central Case Examination Group (CCEG), which was devoted to the persecution of so-called ‘anti-party’ individuals, Kang wielded huge power, with former president Liu Shaoqi the CCEG’s most important victim.

By August 1973, Kang was very ill with cancer and withdrew again from public life, though he was still appointed a party vice-chairman. Kang Sheng was forever adaptable to circumstances, knew how to manipulate alliances and then to strategically withdraw from them, thus avoiding the purges in which he readily participated.

After his death on December 16th 1975, Kang Sheng was given a full Communist Party funeral, where he was praised as a “proletarian revolutionary”. In October 1980, just before the disgraced Gang of Four were placed on trial, Kang Sheng was posthumously expelled from the Party. John Byron and Robert Pack described him in their 1972 book The Claws of the Dragon as the “evil genius” behind Mao Zedong and the atrocities he inflicted on the Chinese people.