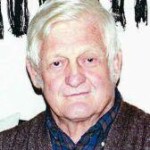 William Hinton was born in Chicago in 1919. His father was a lawyer who committed suicide when Hinton was young, his mother an innovative teacher who founded the elementary school that Hinton later attended. He went on to study at Harvard and Cornell, graduating with a science degree in agronomy and animal husbandry. In 1947 Hinton, a member of a United Nations relief program, was sent to Guomindang-controlled Hubei province to assist and train Chinese farmers. Hinton was so appalled at the level of government corruption under the Nationalists that he soon crossed into Shanxi, a region controlled by the communists. There he remained until 1953, living and working in the village of Long Bow and experiencing the communist land reforms of the early 1950s. Hinton was a prolific note taker who chronicled these dramatic changes, without shying away from lurid or painful details.

Returning to the United States at the height of McCarthyism, Hinton’s notes were seized and he was questioned by the Federal Bureau of Investigation. For years Hinton was excluded from many jobs, while he undertook costly legal battles to have his notes returned. When they were returned several years later Hinton wrote the classic Fanshen: A Documentary of Revolution in a Chinese Village. Though undoubtedly sympathetic to the revolution, Fanshen was by no means communist propaganda. Hinton describes the condition of the people, the complex nature of change and changing relationships, and the positive and negative effects the revolution had on Long Bow. Fanshen (the word means to ‘turn over and start anew’) proved popular with both researchers and general readers, selling more than half a million copies worldwide. Hinton retained his faith in socialism, even after the horrors of the Great Leap Forward became known. He returned to China in the 1960s and in 1983 published Shenfan, a study of the evolution of Long Bow since his first book. Disillusioned by rising capitalism in China, Hinton later moved to Mongolia, where he trained and worked alongside local farmers until his death, age 85.

“The gentry of Long Bow – the landlords, the rich peasants, the clan elders, the overseers of temples and the managers of religious groups – would not have been considered ‘well off’ in any Western land. Their lives were luxurious only in contrast to the absolute poverty and near starvation of the great mass of the people. They did not live in palaces. They enjoyed none of the conveniences of modern life.”

“A few poor peasant women in Long Bow, the wives of leading revolutionary cadres, organised a Women’s Association where they could voice their own bitterness against the traitors, encourage their sisters to do likewise and thus bring to the village gatherings the strength of ‘half of China’, as enlightened women liked to call themselves. But the women found as they organised, attended meetings and entered into public life that they met more and more opposition from the men, particularly the men from their own households. The activities of the Women’s Association created a domestic crisis in many a family. Many young wives who nevertheless insisted on going to meetings were badly beaten up when they got home.”

“‘The point is’, said Ts’ai, ‘that only through hot argument can we get at the truth. Real democracy means speaking out one’s own opinion. Only when we ourselves understand this can we lead others to understand and use democracy.'”

“I often thought what hardship it must be for such a woman to live the life of a spartan revolutionary cadre in the bleak North China countryside… Yet she seemed to pay no attention whatsoever to cold, fatigue, lice, fleas, coarse food, or the wooden planks that served as her bed. For her this was all a part of ‘going to the people’ who alone, once they were mobilised, could build the new China of which she dreamed.”