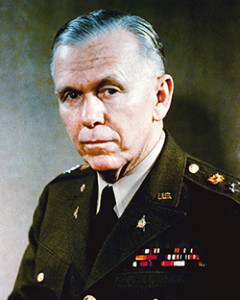 George Catlett Marshall (1880–1959) was a highly decorated American general, statesman, diplomat and military leader. He became famous for his leadership of an American delegate to China in the mid-1940s.

Born into a middle-class family in Pennsylvania, Marshall was educated at a military college before joining the US Army as a second lieutenant in 1902. He served in the Philippines and World War I, and by the outbreak of World War II was US Chief of Staff (1939-45).

Marshall resigned his commission after the war but was sent into China by US president Harry Truman, with orders to prevent a civil war between Jiang Jieshi‘s Nationalists and Mao Zedong’s Communists.

Negotiations continued for almost two years. While a brief ceasefire was achieved, it could not be sustained and the civil war was resumed. According to Marshall, “the greatest obstacle to peace [in China] has been the complete, almost overwhelming suspicion with which the Chinese Communist Party and the Guomindang regard each other”.

Marshall returned to America and turned his attention to Europe. He was a key sponsor of the 1948 European Recovery Program, an economic aid initiative to assist European reconstruction after the devastation of World War II. This program came to bear his name: the ‘Marshall Plan‘.

Marshall became Truman’s Secretary of State in 1947 but retired in 1949 due to ill health. His skills and expertise were sought again in 1950 when America became a key protagonist in the Korean War. Truman appointed Marshall as Secretary of Defense, a position from which he resigned in 1951.

Marshall’s contribution to post-war geopolitics has divided opinion. Some hail Marshall as a brilliant administrator while some criticise him for failing to prevent the communist victory in China and America’s involvement in the Korean War.

This Chinese Revolution website is created and maintained by Alpha History. It contains 180,933 words in 267 pages and was updated last on October 28th 2019. For more info, visit Alpha History or our Terms of Use.