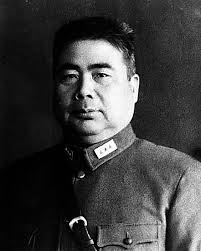 Feng Yuxiang (1882-1948, Wade-Giles: Feng Yu-hsiang) was a powerful military leader, variously known as the ‘Christian general’ or the ‘Christian warlord’. In political alignment with the Nationalists, Feng also served as the first vice premier of China under Jiang Jieshi.

The son of a Qing officer, Feng followed his father into the military, enlisting in the army at 14 years of age. In 1902, he joined the modernised New Army.

Nine years later, Feng participated in the Xinhai Revolution, taking part in an anti-Qing rebellion in southern China and later enduring arrest and imprisonment. He was eventually released and returned to military service, however, he opposed president Yuan Shikai’s attempt to restore the imperial monarchy.

Feng converted to Christianity in 1914 and practised it devoutly all his life. He attempted to spread his religious faith to the men in his command, combining modern military training with worship, Bible lessons and the singing of hymns. He was also known for ‘baptising’ entire troop companies with a fire hose.

After the collapse of the republican government in 1916, Feng operated as a warlord, albeit one with nationalist and republican sympathies.

In 1924, he seized control of Beijing, cleared the Forbidden City of the former emperor Puyi and his retinue and invited Sun Yixian to return to the city to re-establish republican government. Feng’s troops later participated in the Northern Expedition (1926-28).

The following year Feng was appointed as Jiang Jieshi’s war minister and vice premier. Feng, despite his warlord status, was more moderate than Jiang and he began to question the generalissimo’s policies and tactics.

In 1930, Feng and other Guomindang leaders moved against Jiang and attempted to oust him from power. They were later defeated in the Central Plains War. Though he remained strongly critical of Jiang and his leadership, Feng led Nationalist military units during the anti-Japanese war.