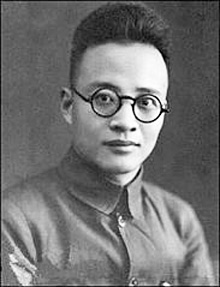 Born in Jiangsu Province, Bo became a student activist, campaigning against imperialism and the divisive warlordism of the early 1920s. He attended the radical Shanghai University and became interested in Marxism and Leninism.

In 1926, Bo was sent for revolutionary studies in Moscow. There he met other Chinese students; collectively they became known as the ’28 Bolsheviks’ or ‘Returned Students’. They were sent back to China to take control of the fledgeling CCP in Jiangxi province.

After their arrival in Jiangxi Bo, Zhou Enlai and Otto Braun, a military advisor from the Comintern, supplanted Mao Zedong as leaders of the CCP’s Red Army.

In 1934, the communists were forced to flee Jiangxi after Jiang Jieshi‘s successful Fifth Encirclement Campaign. Responsibility for disasters like the Xiang River crossing (November 1934) and other tactical failures fell on the shoulders of ’28 Bolsheviks’.

After the Zunyi Conference (January 1935), Bo lost his position as general secretary of the CCP, allowing Mao to assume a position of dominance. Bo was accused of serious political misjudgements, however, he retained a degree of authority and importance within the party.

Bo was part of the group that negotiated with the Nationalists during the Xi’an Incident in 1936. He also held important positions, serving as the head of the Xinhua News Agency and remaining a member of the Central Committee.

Bo never regained Mao’s full trust, however. In February 1946, after attending a Congress in Chongqing as a CCP delegate, Bo was killed in a plane crash, along with several other prominent party leaders.