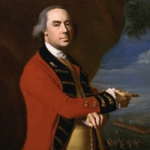 Thomas Gage (1721-1787) was an English general who for a decade commanded Britain’s land forces in America. A thoughtful and mild-mannered figure, Gage was well regarded by most Americans. In May 1774, following the passing of the Coercive Acts, Gage returned to America to oversee the restoration of order in Massachusetts. On September 1st 1774 Gage ordered his men to seize the contents of the Provincial Powder House, north-west of Boston. This triggered what became known as the Powder Alarm. The colonists, interpreting Gage’s action as a prelude to war or military oppression, hastened their military preparations. In these reports to the Earl of Dartmouth, Secretary of State for the Colonies, Gage paints a dire picture of the situation in British America. The colonials were readying for war, Gage reported, and the rebellion was no longer confined only to Massachusetts:

“Your Lordship will know that the state not of this province only, but of the rest, is greatly changed since Mr Hutchinson left America. Though I saw things were bad when I wrote from Salem, I found them much worse than I expected when I arrived here… Civil government is near its end, the courts of justice expiring one after another.

I mean, My Lord, to recur all I can by degress [retreat] to avoid any bloody crisis as long as possible, unless forced into it, which may happen. His Majesty will, in the meantime, judge what is best to be done… A very respectable force will take the field… Conciliating, moderation, reasoning is over. Nothing can be done but by forcible means. The [American] people are not held in high estimation by the troops, yet they are numerous, worked up to a fury, and not a Boston rabble but the freeholders and farmers of the country…”

“As far as it can be seen, nothing less than the conquest of almost all the New England provinces will procedure obedience to the late Acts of Parliament… It is somewhat surprising that so many in the other provinces interest themselves so much in the behalf of this. I find they have some warm friends in New York and Philadelphia. I learn by an officer who left Carolina… that the people of Charlestown are as mad as they are here…

People are daily resorting to this town [Boston] for protection, for there is no security to any person deemed a friend of the [British] government in any part of the country. Even places always esteemed well affected have caught the infection and sedition flows copiously from the pulpits. The Commissioners of the Customs have thought it no longer safe or prudent to remain at Salem… and are amongst others to come to into the town, where I am obliged likewise to reside…”

“We hear nothing but extravagancies in some part or another, and of military preparations from this place to the province of New York, in which the whole seems united. Upon a rumour propagated… that the soldiers had killed six people and that ships and troops were firing in Boston, the whole country was in arms… From present appearances, there is no prospect of putting the late Acts in force, but by first making a conquest of the New England provinces.

Your Lordship will know from various accounts the extremities to which affairs are brought, and how this province is supported and abetted by others beyond the conception of most people… The disease was believed to have been confined to the town of Boston, from whence it might have been eradicated without a great deal of trouble… But now it is so universal that there is no knowledge where to apply a remedy…”