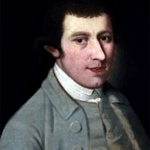 Nicholas Cresswell (1750-1804) was an English farmer, traveller and chronicler. The son of an affluent sheep farmer from Edale in Derbyshire, Cresswell went to North America in search of adventure but with one eye on investment opportunities and future relocation there. He arrived in Virginia in May 1774 and remained in America for three years, travelling around the mid-Atlantic region and venturing inland to remote settlements and Native American villages. A Loyalist at heart, Cresswell’s experiences were frequently disrupted by revolutionary criticisms of Britain and its king. In the end, the American Revolution led to Cresswell abandoning his plans to relocate to America. Instead, he returned to sheep-farming and marriage in his native Derbyshire. The following extracts from Cresswell’s American diary between October 1774 and February 1775 contain observations about the rising revolutionary movement:

October 24th 1774: “Everything here is in the utmost confusion. Committees are appointed to inspect into the characters and conduct of every tradesman, to prevent them selling tea or buying British manufactures. Some of them have been tarred and feathered, others had their property burnt and destroyed by the populace. Independent companies [militias] are raising in every county on the continent and train their men as if they were on the eve of a war. A general Congress of the different colonies met at Philadelphia on the fifth of last month, are still sitting, but their business is a profound secret. Subscription is raising in every colony for the relief of the people of Boston. The King is openly cursed and his authority set at defiance. In short, everything is ripe for rebellion.

The New Englanders, by their canting, whining, insinuating tricks, have persuaded the rest of the colonies that the government is going to make absolute slaves of them. This I believe was never intended, but the Presbyterian rascals have had address sufficient to make the other colonies come into their scheme. By everything that I can understand, independence is what the Massachusetts people aim at, but [I] am not in the least doubt that the [British] government will take such salutary and speedy measure as will entirely frustrate their abominable intentions. I am afraid it will be some time before this hubbub is settled and there is nothing to be done now…”

November 1st 1774: “This evening, went to the tavern to hear the Resolves of the Continental Congress. Read a petition to the Throne and an address to the people of Great Britain. Both of them full of duplicity and false representation. I look upon them as insults to the understanding and dignity of the British Sovereign and people. Am in hopes their petitions will never be granted. I am sorry to see them so well received by the people… It is a plain proof that the seeds of rebellion are already sown and have taken very deep root… I am obliged to act the hypocrite and extol these proceedings as the wisest productions of any assembly on Earth, but in my heart, I despise them and look upon them with contempt.”

November 2nd 1774: “Writing to my friends at home. Obliged to put the best side outwards and appear a little Whigified [pro-revolution] as I expect my letters will be opened before they get to England.”

November 3rd 1774: “Saw the independent company exercise. The effigy of Lord North was shot at, then carried in great parade into the town and burnt.”

November 6th 1774: “Went to a Presbyterian meeting. These are a set of rebellious scoundrels, nothing but political discourses instead of religious lectures.”

February 18th 1775: “I understand the Committee [of Safety] are going to take me up for a spy. I will save them the trouble by decamping [leaving] immediately. The committees act as justices. If any person is found to be inimical to the liberties of America, they give him over to the mob to punish as they think proper, and it is seldom they come off without tarring and feathering. It is as much a person’s life is worth to speak disrespectfully of the Congress. The people are arming and training in every place. They are all liberty mad.

February 25th 1775: “This is the last day tea is allowed to be drank on the continent, by an act of Congress. The ladies seem very sad about it.”