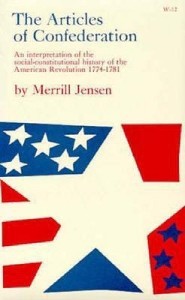 Merrill Jensen was an American historian of the mid 20th century.

Jensen became an instructor and professor at both universities. He also held a one year tenure as professor of American history at Oxford University (1950) and served with the US military as a historian. Jensen died in January 1980.

As a historian, Jensen specialised in the American Revolution, the rise of the United States Constitution and the early republic.

His 1940 book on the Articles of Confederation was a groundbreaking examination of America’s first constitution, exploring its drafting, ratification and implementation. Few historians had focused specifically on the Articles, which had been written off as a poor first attempt at a national constitution.

Jensen challenged the consensus view that the Articles were fundamentally flawed. Just because the Articles were replaced, Jensen argued, did not mean they had failed. He attributes the undermining of the Articles and their replacement by the Constitution to a political campaign, waged by American elites, who wanted control over trade and power over state governments.

Like Beard, Jensen believes the evolution of America’s political system was influenced, if not determined by economic self-interest.

“[The American Revolution was] predominately an internal revolution carried on by the masses of the people against the local aristocracy.”

“The Revolution was essentially, though relatively, a democratic movement within the 13 American colonies… The Articles of Confederation were the constitutional expression of this movement and the embodiment in governmental form of the philosophy of the Declaration of Independence.”

“When it came to the formation of a common government for all the states, the radicals [who wrote the Articles of Confederation] were guided by experience and by certain political ideas. Experience had taught them to dislike the colonial governing classes and to fear the concentration of wealth and political power. Their political philosophy taught that governments exercising power over wide areas were inherently undemocratic in action.”

“The picture [of the United States under the Articles of Confederation] is one of stagnation, ineptitude, bankruptcy, corruption, and disintegration. Such a picture is at worst false and at best grossly distorted.”

“The fact that the Articles of Confederation were supplanted [replaced] by another constitution is no proof either of their success or of their failure. Any valid opinion as to the merits of the Articles must be based on a detailed and unbiased study of the Confederation period.”

“We have too long ignored the fact that thoroughly patriotic Americans during the 1780s did not believe there was chaos and emphatically denied that their supposed rescuers [the Federalists] were patriotic.”

“The Articles of Confederation were designed to prevent the central government from infringing upon the rights of the states, whereas the Constitution of 1787 was designed as a check on the power of the states and the democracy that found expression within their bounds.”

“Even if it can be granted that most appeals to the history of the Confederation have been sincere, let it also be said that they have seldom been infused with any knowledge of the period or its problems.”

“The conservative elements in American society had learned a bitter lesson at the hands of the radicals. They too could call conventions. They too could paint dark pictures of the times and blame the supposed woes of the country on the Articles of Confederation, as the radicals had blamed the British government before 1776.”

“[The Federalists] engineered a conservative counter-revolution and erected a nationalistic government whose purpose, in part, was to thwart the will of ‘the people’ in whose name they acted. They too could use one name while pursuing a goal that was the opposite in fact. Thus, although the purpose of the conservatives was ‘nationalistic’, they adopted the name ‘Federalist’, for it served to disguise the extent of the changes they desired.”

American Revolution contains articles, sources and perspectives on events in America between 1763 and 1789. This site is created and maintained by Alpha History. It contains 151,925 words in 229 pages. This site was last updated on August 19th 2020. For more info, visit our FAQ page or Terms of Use.