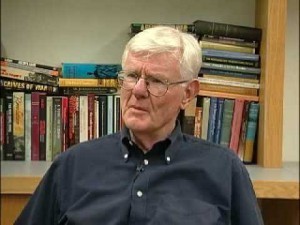 Gordon Wood is one of the most prominent and prolific American historians of the modern era.

Wood was born in Concord, near the scene of the American Revolution’s first battle. He served abroad with the United States Air Force and completed a master’s degree at Harvard.

In the early 1960s, Wood studied at Harvard under Bernard Bailyn, as did historians like Pauline Maier and Mary Beth Norton. He obtained his doctorate in 1964 and has since taught at several prominent universities, most recently Brown University in Rhode Island.

Wood is a neo-Whig who considers the revolution and American republicanism as progressive, society-changing events. His books examine significant political and revolutionary events but Wood constantly returns to New World and Enlightenment themes, including equality, egalitarianism, American exceptionalism and progressive ideas with a degree of consensus.

Wood suggests that the American Revolution lacked the class tension and violence of other revolutions because its aims were widely shared across American society. Similarly, American revolutionary ideas did not come from an intellectual elite or from professional revolutionaries – they were derived from ordinary people. Most Americans, Wood argues, wanted a new society that was based on equality, merit, industry, commerce and entrepreneurship.

With regard to the Constitution and its creators, Wood hails their innovation at creating a balanced and enduring political system. Of their motives, he takes a similar view to Charles Beard, suggesting that the Founding Fathers were more conservative than radical.

“[The American Revolution] was one of the greatest revolutions the world has known, a momentous upheaval that not only fundamentally altered the character of American society but decisively affected the course of subsequent history.”

“We Americans like to think of our revolution as not being radical. Indeed, most of the time we consider it downright conservative. It certainly does not appear to resemble the revolutions of other nations in which people were killed, property was destroyed and everything was turned upside down.”

“If we measure the radicalism by the amount of social change that actually took place, then the American Revolution was not conservative at all. On the contrary, it was as radical and as revolutionary as any in history.”

“The Revolution released and intensified forces that helped create in America a society unlike any that had existed before. Democracy and equality were no longer issues to be debated; they had become articles of faith to be fulfilled. [Americans were] filled with the sense of great possibilities that lay before them.”

“The vision of the revolutionary leaders is breathtaking. As hard-headed and practical as they were, they knew that by becoming republican they were expressing a utopian hope for a new moral and social order led by enlightened and virtuous men. Their dreams and eventual disappointments make them the most extraordinary generation of political leaders in American history.”

“The Federalists were not men of the future after all. . . . it was the Anti-Federalists who really saw best and farthest. If either side in the conflict over the Constitution stood for modernity, perhaps it was the Anti-Federalists. They, and not the Federalists, may have been the real harbingers of the moral and political world we know–the liberal, democratic, commercially advanced world of individual pursuits of happiness.”