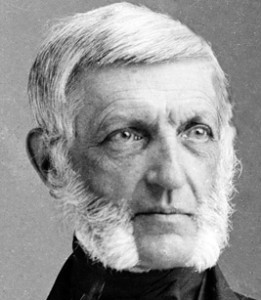 Books: History of the United States of America, from the Discovery of the American Continent (1854).

Bancroft was born in Worcester, Massachusetts, the son of a Revolutionary War veteran, and raised in an upper-class family. He attended Harvard from age 13, graduating four years later then undertaking further study in German universities. He specialised in language studies, graduating in 1820 with a Master of Arts and a doctorate.

Bancroft returned to Harvard and took a position tutoring in Greek. During the 1820s, he developed a passion and an aptitude for history, politics and speech making. He began writing what would become his ten-volume masterpiece, History of the United States.

Bancroft also entered politics, running unsuccessfully for the governorship of Massachusetts (1844), serving briefly as Secretary of the Navy under President James Polk (1845-46) and then as ambassador to Great Britain (1846-49).

On his return from London in 1849, Bancroft moved to New York and threw himself into historical writing. Despite being a gentleman who wrote about history rather than a true historian, Bancroft’s History of the United States became hugely popular and made its author a small fortune.

Bancroft’s approach was clear: the story of America between 1492 and 1789 was one of progress and divine providence. America had been chosen by God to serve as a model for democracy, self-government and civilisation.

Bancroft had a positive but limited view of the American Revolution. He considered the goals of the revolution to be radical but almost entirely political; they did not extend to social or economic change.

Bancroft glorified the contribution of George Washington, hailing him as a champion of the people, a military genius, a lawgiver and a gentle statesman.

“The spirit of the colonies demanded freedom from the beginning.”

“Puritanism was a religion struggling for the people, a war against tyranny and superstition.”

“[The American Revolution] was radical in its character yet achieved with benign tranquility.”

“The new Republic, as it took its place among the powers of the world, proclaimed its faith in the truth and reality and unchangeableness of freedom, virtue and right. The heart of Jefferson in writing the Declaration, and of Congress in adopting it, beat for all humanity. The assertion of right was made for the entire world of mankind, and all coming generations, without any exception whatever.”

“In America a new people had arisen without king or princes or nobles, knowing nothing of tithes and little of landlords, the plough being for the most part in the hands of freeholders of the soil.”

“The Constitution is, to the American people, a possession for the ages.”

“[The American people], by calm meditation and friendly councils, had prepared a constitution which, in the union of freedom with strength and order, excelled every one known before; and which secured itself against violence and revolution by providing a peaceful method for every needed reform. In the happy morning of their existence as one of the powers of the world, they had chosen Justice as their guide.”