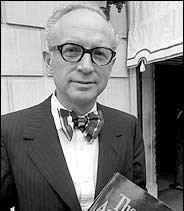 Daniel Boorstin was one of America’s most prominent historians and perhaps its best known conservative historian.

Boorstin was born in Atlanta, Georgia, the son of a Jewish lawyer. He excelled in high school and went on to study at Harvard, Yale and Oxford, earning higher degrees in arts and law.

He served as professor of history at the University of Chicago for 25 years and was visiting professor at Cambridge (UK) in 1964. Boorstin held a directorship at the Smithsonian and in 1975 was appointed Librarian of Congress.

Despite joining the Communist Party during his student years, Boorstin was unabashedly conservative and nationalist. He could be frank and outspoken and sometimes courted controversy, such as when he described African-American studies as “racist trash”.

Boorstin’s historical writing was not popular with scholars. Many took issue with his conservative position; some considered his work disjointed, illogical and sometimes vague; others dismissed it as ‘historical journalism’ rather than real history. Boorstin’s histories were popular with the general public, however, who enjoyed their quirkiness, nationalism and strong patriotic tone.

In terms of historiography, Boorstin saw the American Revolution as a “small revolution”, concerned chiefly with political separation from England.

The revolution, he contends, was never driven by class, equality, social change or economic restructuring. The revolution occurred late and unfolded quickly; it was carried out reluctantly; and it was completed, in relative terms, without much upheaval or difficulty.

“The most obvious peculiarity of our American Revolution is that, in the modern European sense of the word, it was hardly a revolution at all.”

“Historians have exaggerated the significance of what is supposed to have been the ideology of the Revolution. Such an emphasis has had the further attraction to some liberal historians of seeming to put us in the main current of European history. It has never been quite clear to me why historians would not have found our revolution significant enough, merely as a victory of constitutionalism.”

“The Revolution itself had been a kind of affirmation of faith in ancient British institutions. In the institutional life of the American community the Revolution thus required no basic change. This helps to account for the value which we still attach to our inheritance from the British constitution: trial by jury, due process of law, representation before taxation, habeas corpus, independence of the judiciary, and the rights of free speech, petition and free assembly, as well as our antipathy to standing armies in peacetime.”

“[The American Revolution was] an affirmation of the tradition of British institutions… The Americans were to have forced on them the need to defend the ancient British traditions; to be truer to the spirit of that tradition than George III and Lord North and Townshend knew how to be. They were fighting not so much to establish new rights as to preserve old ones.”

“The American Revolution was not the product of a nationalistic spirit. We had no Bismarck or Cavour or any nationalist philosophy. We were singularly free from most of the philosophical baggage of modern nationalism.”

“Perhaps never was a new nation created with less enthusiasm. To read the history of our Revolution is to discover that the United States was a kind of pis aller [last resort].”

“[Thomas Jefferson] was able to see how the traditions of law could be made to serve future generations and could be the foundation of a whole transformed society because his main experience, his main training, of course, was as a lawyer… He is considered the principal political thinker of the American Revolution [but] he never wrote a work of political thought or political theory. He was a student of history and of the past, and his main documents are really legal documents.”

“The political objective of the Revolution, independence from British rule, was achieved after one relatively short effort. 1776 had no sequel and needed none: the issue was separation, and separation was accomplished.”