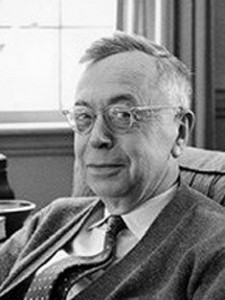 Arthur Schlesinger was a Harvard academic and prominent historian of the early 20th century.

The son of German-Jewish immigrants, Schlesinger was born in Ohio and educated at Ohio State University, graduating in 1910. He lectured in both Ohio and Iowa, then completed his doctorate at Columbia University in New York City in 1918.

In 1924, Schlesinger joined Harvard as a professor of history; he would remain there for three decades. He was also a visiting lecturer at universities in London, Edinburgh and Leyden and a president of the American Historical Association. His son Arthur Schlesinger Jnr became an acclaimed historian, winning a Pulitzer Prize and serving as an advisor to US president John F. Kennedy.

After Schlesinger’s death in October 1965, he was hailed as a groundbreaking historian, an educational reformer and a champion of liberal and humanistic values.

In terms of perspective, Arthur Schlesinger Snr. was chiefly a Progressive historian who was interested in how economic developments affected the lives of people and communities.

His 1918 book The Colonial Merchants and the American Revolution charted a similar course to the work of Charles Beard. The colonial merchants in American port cities, Schlesinger argues, were driven not by politics but by self-interest and the chase for profits.

Before the French and Indian War, Schlesinger contends, colonial merchants flourished under ‘salutary neglect’ by disregarding or bypassing Britain’s mercantile legislation. They profited from imperial trade by engaging in smuggling to and from French colonies in the Caribbean.

Britain’s crackdown on smuggling and trade from 1764 led many of these merchants to align with political radicals, a group the merchants had previously despised. Anti-British measures like opposition to the Townshend duties, non-importation agreements and the Boston Tea Party, Schlesinger claims, were therefore driven by the self-interest of colonial merchants, as much as political idealism or concern for rights.

“The most distinctive activity undertaken by the merchants was the formation of non-intercourse [non-importation] agreements.”

“Less intent on politics than business, the merchants as a class did not ordinarily concern themselves with political questions. But when their interests were jeopardised they entered politics with a vim, and might be expected to carry things their own way.”

“The merchants were sensitive and articulate with regard to their interests as members of the British empire. They were ever on the alert to obtain the best terms possible from the home government.”

“That smuggling with the foreign islands was extensive and important, the evidence is plentiful and uncontradicted.”

“Colonial smugglers felt the first impact of an opposing imperial interest during the last intercolonial war [the French and Indian War] when, covetous of large profits, they supplied French belligerents in America with foodstuffs, whereby they [the French] were enabled to prolong the war.”

“The merchants of the great northern ports were startled by the mob excesses and destruction of property which their agitation had caused… The developments of the years 1767-1770, fomented by mercantile interests in large part, brought the merchants to a serious realisation of the growing power of the irresponsible elements and the drift of events toward lawlessness.”

“The disastrous outcome of this unnatural alliance [between colonial merchants and political radicals] convinced the merchants as a class that their future welfare rested with the maintenance of British authority.”