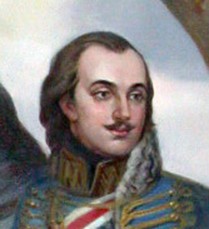 Casimir Pulaski (1747-1779) was a Polish general who served with the Continental Army during the Revolutionary War. Pulaski was born in central Poland, the son of a local count. Like many other young aristocrats, Pulaski became involved in the struggle for Polish independence from Russia. Wanted by the authorities, he withdrew to France in 1772. It was there he met Benjamin Franklin, who urged Pulaski to volunteer his military services to the Continental Army. Armed with a reference from Franklin, Pulaski arrived in America in 1777. He distinguished himself with acts of daring and bravery, at one point saving the life of George Washington. Shortly after, Pulaski was commissioned, given the rank of brigadier general and put in charge of the Continental cavalry, a depleted and untrained branch of the army. He attempted to reorganise and reform the cavalry, forming a riding school and implementing a strict training regimen. Pulaski’s grasp of English was poor, however, and he found American officers difficult to manage and work with. He resigned in 1778, took command of a volunteer company and placed himself at the disposal of Congress. He was killed in action in October 1779 during the battle for Savannah, Georgia. Americans today continue to honour Pulaski as the ‘father of American cavalry’ and a foreign hero of the revolution.